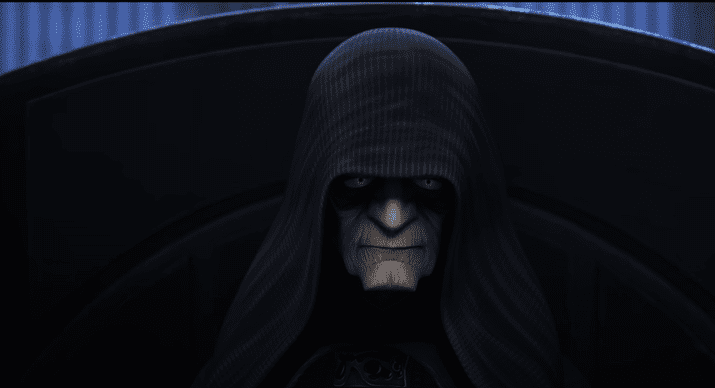 During the Star Wars Celebration, Dave Filoni helped revealed what the second season of The Bad Batch will include, and shockingly enough, Emperor Palpatine is back.

While fans were expecting more from Clone Force 99 (all voiced by Dee Bradley Baker) there were quite a few unexpected moments from the trailer. If you haven’t had a chance to see the new trailer, watch it right now before reading on:

The Bad Batch has been confirmed to continue forward with Clone Force 99, but some time will have passed between the two seasons. One noticeable change is that the group has repainted their armor to be grey and yellow instead of the grey and red paint scheme.

Crosshair will be returning and is seen working alongside Commander Cody meaning that there will be some interesting moments in the season where Cody and Rex could reunite on the opposite sides of the battlefield. For Clone Wars fans, this is everything they wanted to see, but Star Wars still had some more surprises in store.

Related: Commander Cody Is Primed to ACTUALLY Return to ‘Star Wars’ This Time

Gungi, the Wookie padawan, is back and he seems to be one of the unlikely allies for Clone Force 99. Kashyyk looks like it will be returning and Gungi will be joining the fight as the Empire will definitely be trying to take down the Wookie warriors as they attempt to occupy the planet.

Tarfful may be one of the leading Wookies briefly spotted in the trailers and if that’s the case, then fans are hoping to possibly see Chewbacca as the two of them would be working together. This could be how Chewbacca is imprisoned and eventually found by Han Solo.

Besides all this, fans were surprised that the Emperor is back and he states that the Empire is “entering a new era” with footage of Tipoca City in ruins behind him. Most likely, Omega and her friends will hear Palpatine’s explanation of why Kamino had to be destroyed as the Emperor would justify his actions to the Imperial Senate.

This wouldn’t be the first time Filoni has allowed other characters to steal the spotlight in the series as Hera Syndulla and her father Cham almost stole two episodes from the first season to explain their time on Ryloth after the clones occupied the city.

Are you excited to see more of Palpatine in The Bad Batch Season 2? Let us know what you think!

Comments Off on ‘Star Wars’ Can’t Leave Palpatine Alone, Brings Him Back For New Series