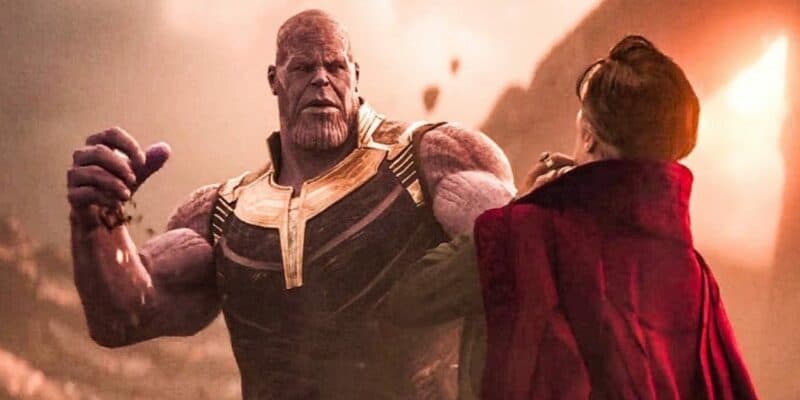 Benedict Cumberbatch’s Doctor Strange and Josh Brolin’s Thanos made a shocking appearance in one of the latest Moon Knight featurettes.

Star Wars alum Oscar Isaac has been very busy promoting his latest project with the MCU as he stars as Steven Grant/Marc Spector/Moon Knight in the upcoming series. Marvel has ramped up their marketing with new clips and featurettes to help build up hype for the series.

Fans have been seeing more of May Calamawy’s Layla El-Faouly and Ethan Hawke’s Arthur Harrow in the recent clips letting fans know what to expect. Based on the trailers, it’s very likely that Calamawy’s character will be learning about Marc’s condition at the same time as fans. The series will explore how Moon Knight suffers from Dissociative Identity Disorder which is why he can’t remember certain things.

In one of the recent featurettes, Marvel teased fans about Doctor Strange in the Multiverse of Madness (2022) by having the actors sit in a Marvel waiting room to avoid spoiling the series — obviously, a joke pointed towards Tom Holland and Mark Ruffalo — where the camera shows who the employee of the month is. Instead of it showing Moon Knight like fans would expect, Marvel placed different pictures of Doctor Strange in the frame. Here’s the featurette in case you haven’t seen it:

A new #MoonKnight  featurette has been released:

A new #MoonKnight featurette has been released: pic.twitter.com/KedscJqUQD

The room also has a picture of Thanos labeled, “It’s A Snap!” which is hilarious since Thanos is holding the Infinity Gauntlet. Off to the side, there is another picture with the Watcher from Marvel’s What If…? labeled, “Watch Something Say Nothing.” It seems that Marvel had a lot of fun decorating this room with memorable MCU moments.

It seems that Marvel is hoping to not let any more actors spoil future details about the MCU after Ruffalo and Holland have become infamous for it. Fans will remember how Holland spoiled many details about the movies he was in until Avengers: Endgame (2019) when the actor didn’t know he was filming Tony’s funeral until he arrived.

Ruffalo has seen his fair share of bad moments as he accidentally joked that everyone was going to die in Avengers: Infinity War (2018) which of course wasn’t too far off as Thanos snapped half of the universe out of existence. For the moment, Isaac isn’t following their footsteps, but the featurette teased that Isaac wishes he could tell fans more about the show.

Moon Knight debuts next on March 30.

Are you excited for Moon Knight to be a part of the MCU? Let us know what you think in the comments section below!

There are many things to look forward to in Marvel’s Phase Four. On Disney+  you can expect Moon Knight on March 30, Ms. Marvel in Summer 2022, and She-Hulk to debut this year. For movies, Doctor Strange In the Multiverse of Madness comes out on May 6, followed by Thor: Love and Thunder on July 8, and Black Panther: Wakanda Forever on November 11.