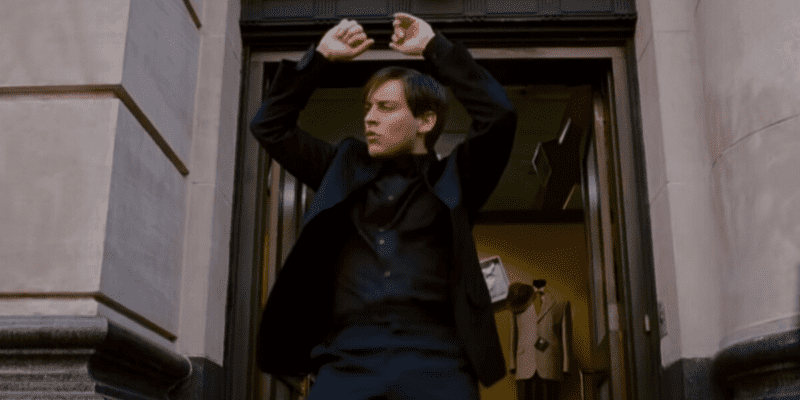 No matter their age, every Marvel fan loves Tobey Maguire’s Spider-Man, especially when Peter Parker becomes “Bully Maguire in Spider-Man 3 (2007). But no one has pulled off a better copy of the superhero’s infamous dance moves than this “Mini Maguire” fan.

The sequence in Sam Raimi’s divisive Marvel movie is forever labeled as “Bully Maguire,” particularly when Peter Parker is shown entering a clothing store and coming out with an all-black outfit, topped off by some groundbreaking dance moves:

One young fan tore up his school’s dance floor with the most impressive Bully Maguire moves that the internet has ever seen:

This kid is doing the #BullyMaguire dance! #SpiderMan

This kid is doing the #BullyMaguire dance! 🤣 #SpiderMan

We’re not joking; this little Marvel fan has got immense potential, especially if Marvel’s looking to introduce multiple variants of Spider-Man and Peter Parker’s in the future.

Who’s to say we won’t see a little Bully Maguire in a future Multiverse film, such as Doctor Strange in the Multiverse of Madness (2022)?

New reports indicate that Tobey Maguire and Andrew Garfield are both returning to their respective franchises to finish their finished stories, most notably The Amazing Spider-Man 3 starring Garfield’s beloved superhero.

Countless insiders are claiming that Tobey Maguire’s Spider-Man appears in Sam Raimi’s Doctor Strange in the Multiverse of Madness, and a new LEGO set leak may have confirmed it!

What do you think about seeing Tobey Maguire in Doctor Strange in the Multiverse of Madness? Let us know in the comments below!