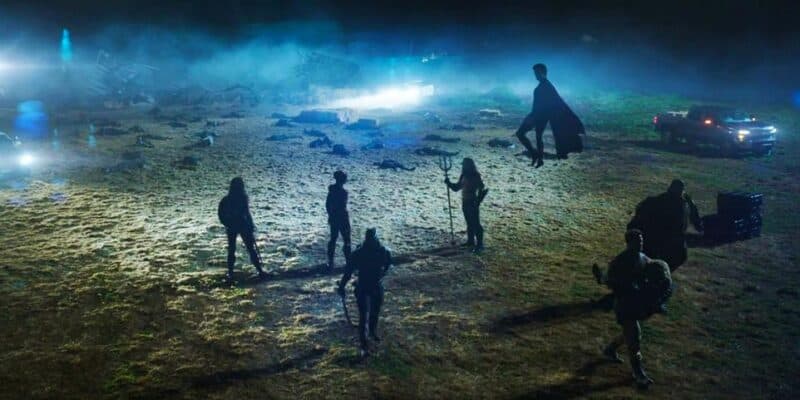 Steve Agee and Jennifer Holland shared their thoughts on the Peacemaker finale and how the crossover reminded them of Nick Fury’s cameos in the MCU.

Last week the finale for Peacemaker aired with the surprise cameo of the Justice League. This wasn’t Zack Snyder’s Justice League, as Ben Affleck’s Batman and Ray Fisher’s Cyborg were missing. On top of this, only Jason Momoa’s Aquaman and Ezra Miller’s Flash were on set. It was even revealed that Marvel helped film the scene with the Flash for DC!

To no one surprise, the internet was furious with this cameo as many fans believed they should boycott Warner Brothers. Yet, the show was confirmed for a second season and now has left fans fuming at James Gunn’s bold direction.

Two actors from the show, Steve Agee and Jennifer Holland weighed in on the Justice League cameo in a recent interview. Agee was a huge fan of Zack Snyder’s Justice League (2021) and admitted that he was happy to be a part of the moment:

It was exciting. I am a big Justice League fan. I like those characters. I like the look of the characters. I like the dramatic feel for those movies. I was a fan of [Zack] Snyder’s Justice League. It was so crazy to shoot it. I mean, that’s all real. They were standing there. We had Superman on a wire. There was a person hanging there. That wasn’t digitally put in there. We had people, same sizes and the same suits. And seeing them silhouetted like that was really amazing for me, as a fan of those movies, to see that. It was awesome. It was so awesome. It was really hard not to talk about it and tell my friends.

Holland — who is now engaged with James Gunn — explains that she felt the moment was very similar to when Samuel L. Jackson’s Nick Fury would appear in the MCU:

I love it. I love when the different shows and movies can cross over. I think it’s fun for fans. I know that, before I was in any of these superhero projects and I was just a fan, it was always fun to see Nick Fury show up at the end of the movie you were watching. You’re like, ‘Oh, cool!’ So I thought that it was going to be really fun.

Comparing the Justice League cameo to Nick Fury is a bold claim as the former director of SHIELD brought all of the original Avengers together. Now, Fury hasn’t been in as many MCU films but will be starring in Secret Invasion as he will be handling a Skrull invasion on earth.

Holland continues that she was happy that her team in Peacemaker was able to have that moment as they both exist in the same world:

You just don’t know how people are going to react to it. But I just hoped that people would see, ‘Oh, cool. There’s a place for all of us in this world.’ We’re a different tone, and we’re a different type of team. Maybe we’re not as superhero as some of the superheroes are, but we’re in the same world, and there’s room for all of us in this world.

Not everyone was happy with the Peacemaker finale, but it was a memorable moment for both the actors and fans. Now, Gunn is hard on work on Guardians of the Galaxy Vol.3 (2023) as it will be the last time the crew will be together. Guardians 3 won’t be the last time you will see the crew as they will first appear in Thor: Love and Thunder (2022) and again in the Guardians of the Galaxy Holiday Special this year.

After recovering from the injuries he suffered during the events of The Suicide Squad (2021), Christopher Smith / Peacemaker is forced to join the mysterious A.R.G.U.S. black ops squad “Project Butterfly”. They are on a mission to identify and eliminate parasitic butterfly-like creatures in human form in the United States and around the world.

Another Suicide Squad Spin-off is in the works with Gunn planning to work exclusively in television for a year after he is done with Guardians 3.

Do you think the Justice League cameo is just as good as any of Nick Fury’s cameos in the MCU? Let us know what you think in the comments below!