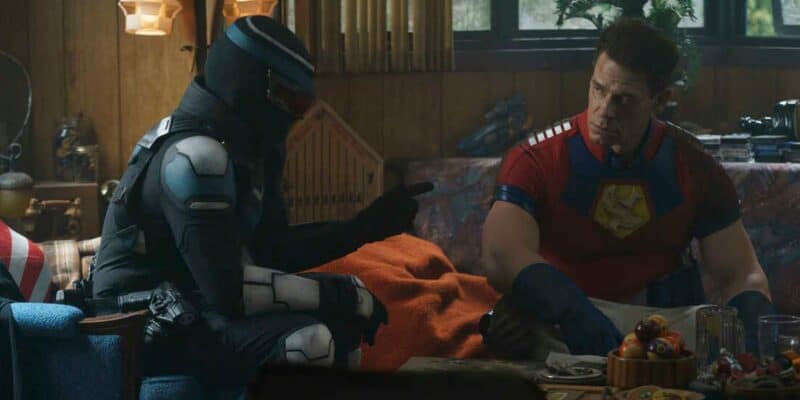 Peacemaker star, Chukwudi Iwuji — who plays Clemson Murn in James Gunn’s new Suicide Squad spinoff super hero show — believes his character in Guardians of the Galaxy 3 is too powerful and complex. Chukwudi Iwuji landed the role thanks to  Gunn asking him during the early production of Peacemaker. Chukwudi Iwuji explained to the Hollywood Reporter:

“I literally went from dancing on the soundstage to James saying, ‘Come over here, I want you to be in Guardians of the Galaxy 3.’”

Now the classically trained actor is playing one of the lead roles in Peacemaker and a new mysterious role in the highly anticipated Guardians of the Galaxy movie. When asked who he was playing, Chukwudi couldn’t say but he did give some insight on his thoughts about the character he is playing:

“Powerful. Extremely powerful. Complex,” Iwuji says when asked to describe his Guardians character. “James and I were talking about it, but he’s certainly one of, if not the most complex characters we’ve seen in the freaking Marvel universe. So he’s deeply complex and deeply powerful, and I hope intriguing. I hope I bring that to it.”

Those are some bold words for a character. Fans have of course begun speculating that Iwuji’s character to possibly be the High Evolutionary. The High Evolutionary is a human geneticist who has the intelligence comparable to a celestial or other very knowledgeable entity.

He prides himself in his research which can cover many studies but is considered the best geneticist as his suit can heal injuries. Often, the High Evolutionary has come across as a villain in the comics but is always one who is trying to achieve the right thing as he is sometimes portrayed as a mad scientist willing to do whatever it takes to complete his work or as a creator who is kind and considerate. Due to this, the High Evolutionary is indeed a very complex character and would match the description, Chukwudi has said.

The super hero show is officially described as:

PEACEMAKER explores the continuing story of the character that John Cena reprises in the aftermath of executive producer James Gunn’s 2021 film The Suicide Squad – a compellingly vainglorious man who believes in peace at any cost, no matter how many people he has to kill to get it!

Guardians of the Galaxy 3 is set to release in May 2023 with Star-Lord (Chris Pratt), Rocket (Bradley Cooper), Drax (Dave Bautista), Groot (Vin Diesel), Gamora (Zoe Saldana), and more returning in James Gunn’s next movie in the Marvel Cinematic Universe.

Who do you think Chukwudi is playing in Guardians of the Galaxy? Let us know in the comments below.