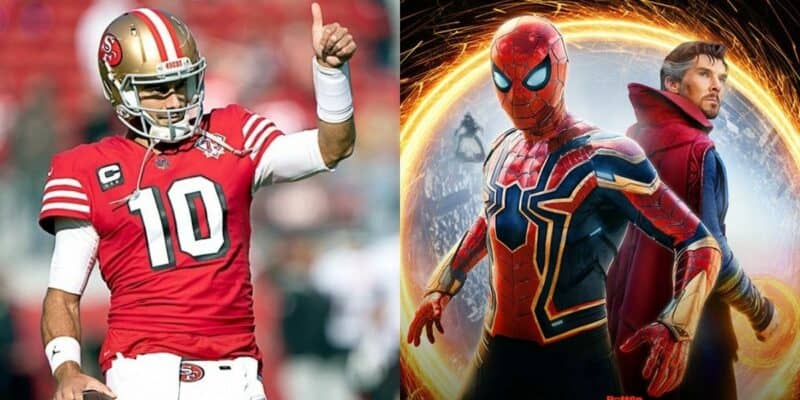 This season, Garoppolo led the San Francisco 49ers to the NFC Championship game against Matt Stafford and the Los Angeles Rams. Although the Rams ultimately advanced to Super Bowl LVI against the AFC Champion Cincinnati Bengals on February 13, 2022, Garoppolo has still been the subject of much chatter in NFL circles recently.

“I know they’re not great cinema. I know they won’t win Oscars… But they always make me feel good when I walk out of the theater.”

Jimmy G is a Marvel movie:

"I know they're not great cinema. I know they won't win Oscars… But they always make me feel good when I walk out of the theater." — @ColinCowherd pic.twitter.com/D7e8FizUOh

Although the quote feels like a bit of a backhanded compliment — after all, saying MCU films won’t “win Oscars” sounds an awful lot like saying Garoppolo will never win a Lombardi Trophy — Cowherd was actually defending the 49ers captain at the time.

Adding to the strangeness is the fact that the Marvel Cinematic Universe’s latest addition, Spider-Man: No Way Home, has actually been in the Academy Awards conversation — and star Tom Holland is rumored to be hosting this year’s event.

As usual, Marvel fans have a full slate of projects to look forward to in 2022, beginning with Star Wars alum Oscar Isaac’s Disney+ Original series, Moon Knight, on March 30, 2022.

You can currently still catch blockbuster hit No Way Home in theaters near you.

MCU fans can currently catch the latest chapter in Spider-Man’s story in Spider-Man: No Way Home, which hit theaters on December 17, 2021.

What do you think about Colin Cowherd’s odd Jimmy G. and Marvel movie comparison?