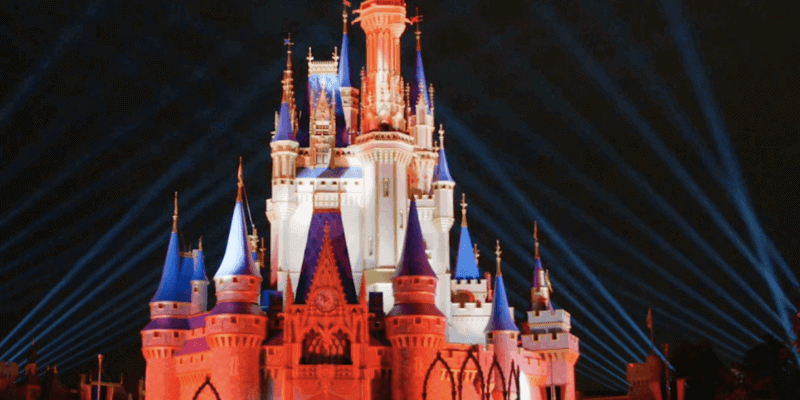 The Super Bowl is a huge event for many Americans, and actually has a pretty big Disney proponent to it!

Typically, the winning team’s MVP announces that he wants to go to Disney World, and the following day there is a Super Bowl Parade down Main Street U.S.A. This year, due to the ongoing COVID-19 pandemic, Walt Disney World Resort will not be hosting the parade, but the theme park destination is still doing a little something special to commemorate the win.

This year’s Super Bowl LV is hosted the Tampa Bay Buccaneers and the Kansas City Chiefs (who won last year’s Super Bowl) at Tampa’s Raymond James Stadium. The Tampa Bay Buccaneers — who are just a mere 75 miles from Disney World — won the Lombardi Trophy, and Cinderella Castle at Magic Kingdom joined in on the celebration. Every Disney fan who loves football needs to check this out!

Disney Parks Blog celebrated alongside the Buccaneers by lighting up Cinderella Castle in the official team colors after park close.

After the Tampa Bay Buccaneers won Super Bowl LV at Raymond James Stadium in Tampa Bay tonight, down the road, Walt Disney World Resort has illuminated Cinderella Castle in the Buccaneers’ colors and in blue for healthcare heroes, as a beacon of celebration and hope throughout the night.

Congratulations to the Super Bowl LV Champions Tampa Bay @Buccaneers! Such great news for Central Florida and we are delighted to light up Cinderella Castle in Magic Kingdom to recognize their achievement. We also turned the Castle blue in honor and deep appreciation for our nation’s healthcare heroes who have worked valiantly throughout the pandemic. We thank them all!
#WaltDisneyWorld
#MagicKingdom
#DisneyMagicMoments
#SuperBowl
#SBLV

The castle begins with the maroon and white colors of the Buccaneers taking over the facade, with spotlights shining bright. Then, a blue color floods the entrance while a pop-beat plays in the background.

Although we already mention that the Super Bowl parade will not take place at Magic Kingdom tomorrow as it typically would, the classic “I’m going to Disney World!” commercial should drop shortly! Likely featuring Super Bowl veteran Tom Brady.

Related: Will Super Bowl MVP Go To Disney World After The Big Game This Year?

What did you think of the Super Bowl? Which Super Bowl commercial was your favorite? Are you sad there is no Magic Kingdom parade?