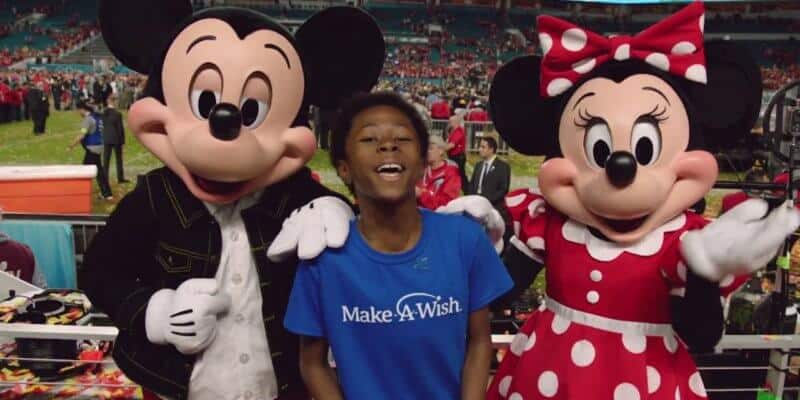 The famous words were shouted by quarterback and Super Bowl MVP Patrick Mahomes who led the Kansas City Chiefs to an impressive victory over the San Francisco 49ers last night. Mahomes’ words will be featured in Disney’s iconic Super Bowl commercial which will air all across the country this week–a tradition that began more than 30 years ago.

Mahomes will make his way to the Walt Disney World Resort near Orlando today for a day full of fun, celebrations and surprises, part of which includes a parade this afternoon at Magic Kingdom that will take place in front of thousands of fans. Disney Parks Blog will livestream the parade today beginning around 2:40 p.m. ET.

Though this tradition has been in place for years, 2020 marks the first year Disney has invited a Make-A-Wish child to ride in the celebratory parade at Magic Kingdom. The child, 10-year-old Nathaniel from Texas, will ride in the parade and he will also get to experience all the magic of Magic Kingdom’s rides and attractions today. It will be an unforgettable day of fun and excitement for Nathaniel and for 17 other Make-A-Wish children who had their Super Bowl dreams granted yesterday.

The magic doesn’t stop there. Disney Parks is donating $1 million to the Make-A-Wish Foundation in honor of Mahomes’ MVP performance as part of the entertainment giant’s commitment to bringing inspiration and comfort to children facing serious and sometimes life-limiting illnesses–a commitment almost 40 years in the making. Disney grants more than 10,000 wishes to children annually.

Be sure to visit Disney Parks Blog this afternoon to be a part of all the unforgettable celebrations, excitement and sheer magic that is sure to be felt during the Super Bowl parade today at Magic Kingdom at Walt Disney World.

Have you ever been to a Super Bowl celebratory parade at Disney World or Disneyland? Tell us all about your experience in the comments below!