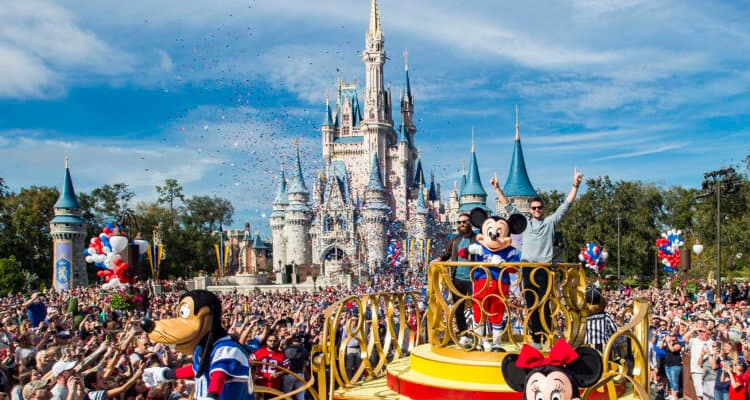 Ever wonder why the MVP of the winning Super Bowl team proclaims “I’m going to Disney World!” almost immediately following the big game? For many Disney fans, this Super Bowl Sunday ad is a classic tradition now spanning generations.

Related: Will the 2021 Super Bowl MVP Go To Disney World This Year?

While in the midst of working on plans for Disney’s MGM Studios in 1986, Eisner and his wife attended a dinner with George Lucas along with Dick Rutan and Jeana Yeager (known for being the first team of aviators to fly around the world without stopping). During dinner, the conversation turned towards Rutan and Yeager’s nonstop flight earlier that year and Eisner asked, “Well, now that you’ve accomplished the pinnacle of your aspirations, what could you possibly do next?” Rutan was quick with a response proudly declaring, “I’m going to Disneyland!“And the rest was history.

Eisner’s wife recalled that the phrase “I’m going to Disneyland!” sounded like it could be a useful marketing slogan for the company. The marketing strategy began to take shape, and the officially named “What’s Next?” campaign launched the following year in 1987 during Super Bowl XXI. In celebration of their win against the Denver Broncos, Phil Simms, MVP and quarterback for the New York Giants became the first player to proclaim “I’m going to Disney World!” during the post-game celebrations. Most of the commercials shot with the slogan since then have featured the song “When You Wish Upon a Star” and a short clip of fireworks over either Cinderella or Sleeping Beauty Castle.

The logistics of how the footage is shot for TV is something fans at home certainly miss out on. While the commercial is ultimately a filmed look at fairly natural reaction (especially now that it’s been a tradition for so long) a little known fact is that it is actually shot in two takes, and two takes only. The celebration you see taking place on TV is what’s actually happening at the game- One take features the MVP saying he’s going to Disneyland while the other take uses Disney World. Both takes are used and the footage shown on your local station depends on where you live. The actual trip to either Disneyland or the Magic Kingdom typically depends on which park is closer and easier to get to based on where the game was played.

While the MVP of the winning team is usually responsible for the ad campaign, this is not always the case, and anyone on the team is welcome to attend the celebratory Disney trip which features a short parade down Main Street, U.S.A. For example, Ray Lewis was a linebacker for the Baltimore Ravens when he was named MVP following Super Bowl XXXV, but due to his murder trial a year earlier the slogan was given to quarterback Trent Dilfer instead.

The player in the ad is also not under any requirement to actually go to the parks — as long as some representatives from the team are present. Following Super Bowl LI for instance, New England Patriots MVP Tom Brady starred in the ad campaign but gave his Disney parks experience to James White, who was responsible for the touchdown that won the game. Of course, the players who participate are compensated an estimated $30-70K depending on their roles in marketing the parks following the game.

As most marketed celebrity visits to Disney parks go, the winning Super Bowl team’s trip the the Walt Disney World Resort or Disneyland is not really comprised of an actual vacation. The entire trip typically lasts for a couple of hours and it often includes the quick run through the Magic Kingdom or Disneyland for the parade with a couple of stops at the newest attractions for promotional purposes of course. And Super Bowl MVPs or athletes in general are not the only types of celebrities who have these kinds of trips to Walt Disney World. When new attractions open, ABC launches a new TV series, or when a celebrity supports to a Disney-centered non-profit organization like the Make-a-Wish Foundation, you may catch them doing a speedy promotional run at the Magic Kingdom.

This year’s event will feature the 33rd “What’s Next?” commercial and new for this year Disney fans have a chance to be a part of the action. NFL.com is hosting a contest where fans can submit their own “I’m going to Disney World!” videos for a chance to join the players in their parade down Main Street U.S.A. and to spend a night in the Cinderella Castle Suite!

Want to make sure you’ll be in the parks for this year’s parade? Contact our preferred Disney vacation specialists at Academy Travel! They’ll ensure that you get the best deals on everything from accommodations to park tickets and they can help plan your vacation against the Super Bowl champions’ celebratory parade down Main Street. Click here for a free, no obligation quote and start planning your next Disney trip today.

Have you attended any of the Super Bowl celebrations at a Disney park? Let us know in the comments!

Comments Off on Why the Winning Super Bowl MVP says “I’m Going to Disney World!”