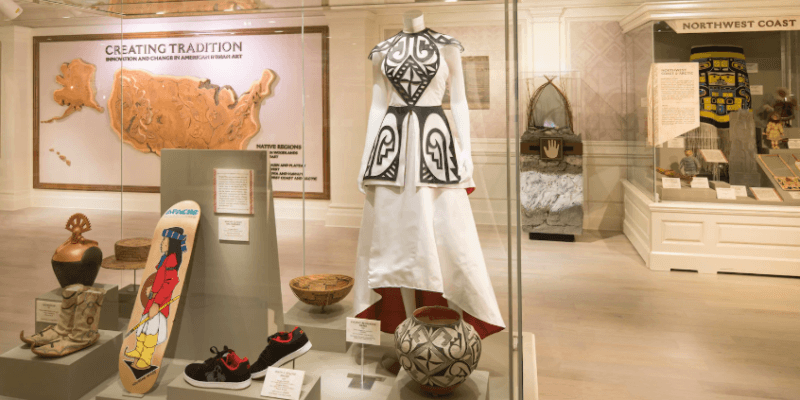 With the right frame of reference, the Walt Disney World Resort has the potential to come to life as a playground for art lovers. Works of fine art, both authentic originals and replicas can be found in each of the four theme parks and around the many themed resorts. All mediums are covered from paintings and drawings to sculptures, fashion, and more, and we’re excited to share some of our favorite works of art for you to discover on your next trip:

The mosaics inside the halls of Cinderella Castle make up some of the best examples of fine art at the Walt Disney World Resort. The murals designed by Disney Legend Dorthea Redmond re-tell the classic fairy tale through expertly cut and placed pieces of hand-cut Italian glass along with silver and 14-carat gold. Over 500 colors were used in the murals that stand 15 ft. tall x 10 ft. wide. The murals feature all of the memorable characters from this classic story along with nods to Disney Imagineers like John Hench and Herb Ryman- see if any of the characters have a familiar face next time you walk through to Fantasyland.

DinoLand USA in Disney’s Animal Kingdom is full of eclectic art when one considers the themed memorabilia found within the walls of Chester & Hester’s Dinosaur Treasures and Restaurantosaurus. Outside near Hester & Chester’s DinoRama however, guests may stumble upon a contemporary sculpture by American folk artist Mr. Imagination (Gregory Warmack). His dinosaur sculpture stands in contrast to the brightly colored cartoon-style dinos that make up the carnival area of Chester & Hester’s bridging the gap between that space and the land’s main gift shop.

The sculpture is designed with a similar style of the rest of Mr. Imagination’s work, with bits of natural materials making up the rigid surface of the creature. If you look closely, the sculpture also includes a pin from a Disney Cast Member name tag, making this piece home to one of the smallest Hidden Mickeys in Disney’s Animal Kingdom.

Original Artwork in the American Adventure

As you enter the American Adventure rotunda to wait for an upcoming performance of the Audio Animatronic show, be sure to wander around the space to explore some of the original paintings that adorn the walls. These works of art were created specifically for this attraction by Disney Imagineers and motion picture designers, and they all-too-often go unseen by guests focusing on the Voices of Liberty (the pavilion’s must-see A Cappella group).

Each painting covers one of the themes portrayed in the show, ranging from “Westward Ho!” by Jack Martin Smith that covers the expansion into the American West to “Giving Thanks,” a piece focusing on an American family around the Thanksgiving table by Sam McKim, a Disney Legend known primarily for Disneyland map designs and concept sketches.

Be sure to give yourself plenty of time before or after seeing the American Adventure show so you’re able to walk around the rotunda and check out the paintings and also make your way to the adjacent American Heritage Gallery. The current exhibition, Creating Tradition: Innovation and Change in American Indian Art shares a variety of Native American artifacts alongside contemporary artwork, bringing to guests from around the world forms of art that are typically only accessible in large scale museums.

The Art of Disney in Epcot & Disney Springs

Located in both Epcot and Disney Springs, the Art of Disney store is full of original paintings, prints, cels, figurines and all kinds of collectibles sure to please any die-hard Disney fan. You’ll need to save some extra room in your budget because original artwork does not come cheap, but many of the pieces in both stores are stunning and would make wonderful additions to your collection or serve as the perfect splurge on a special occasion trip. Keep an eye out for the animation desks in these stores — during the daytime hours you can often come across an artist creating original sketches of characters from classic Disney films.

The lobby at Disney’s Art of Animation Resort is home to the Storyboard Chandelier, which as its name suggests features artwork from the four animated films featured around the resort (The Little Mermaid, The Lion King, Finding Nemo, and Cars). Occasionally Disney artists, animators, and Legends are invited to sign a panel related to the film they worked on to be added to the Chandelier.

Signed pieces currently hang from the lobby ceiling with panels from Pat Carroll (voice of Ursula), Jodi Benson (voice of Ariel), and Don Hahn (producer of The Lion King) among a variety of other notable names. Next time you’re at the resort searching for photo ops around the beautifully themed grounds, plan to spend some time in the lobby and don’t forget to look up!

Guests can find breathtaking works of authentic African art all around Disney’s Animal Kingdom Lodge and the lobby is of course the best place to start exploring. Whether you are planning an entire stay at the Lodge or simply visiting for breakfast or dinner at Boma, save some extra time to explore the exhibit cases in the lobby that are filled with authentic pieces of art from all over the continent. One of the most unique works of art at the resort is the large-scale Igbo Ijele Mask found near the back of the lobby towards the views of the savanna.

The mask was created by the Igbo people of Nigeria, and it measures about 16 ft. tall by eight ft. wide. The colors and complex design patterns in the mask are inspired by various aspects of Igbo life and culture, and this Ijele is the only one known to exist outside of an Igbo community. Ijele in Nigeria are used to celebrate important events every 10-25 years depending on the occasion, but with this mask created exclusively for Disney’s Animal Kingdom Lodge guests visiting from all over the world are able to learn more about the Igbo culture and take in a beautiful work of art.

Race Against the Sun exhibit in the Morocco Pavilion

One of the newest exhibits to open in Epcot’s World Showcase, Race Against the Sun covers the all-women run sporting events and the culture surrounding them in contemporary Morocco. While the focus of the exhibit is Marathon des Sables, an annual multi-day race comprised of a total of 57 miles, the newly designed space to the left of the pavilion’s main walkway is home to all kinds of related art and artifacts. As the world’s only desert rally specifically for women, the exhibit is full of unique history and works of art and functional objects guests will not find anywhere else outside of Morocco.

The exhibit also features handmade works of art used for commemorating these annual events and special interactive photo ops so guests can become part of the art themselves. Outside of the exhibit, Morocco is one of the most intricately themed pavilions in Epcot, so we recommend spending some extra time exploring the rest of the pavilion and taking in the detailed mosaics, specialty items in the gift shops, and more.

One of the most fascinating murals at Walt Disney World is just a quick walk or monorail ride away from the Magic Kingdom park. Located in the Grand Canyon Concourse at Disney’s Contemporary Resort, the Pueblo Village mural was designed by Disney Legend Mary Blair for the resort’s opening in 1971. Known for her eclectic art style and design work on attractions like it’s a small world and films like Alice in Wonderland and Cinderella, Blair’s mural runs 90 ft. from floor to ceiling and is actually a functional piece of art as it was it was placed in this location to hide the resort’s main elevator shafts.

About 18,000 hand-painted and fire-glazed tiles were used to piece together the design which was inspired by Navajo ceremonial art to capture the allure of the American Southwest. One fun detail to spot in the mural is the five-legged goat, which Blair included as an intentional mistake, paying tribute to the Navajo belief that only the Great Spirit (and thus not anything man-made) is capable of perfection.

For more art around the Walt Disney World Resort, start planning your next vacation with an authorized Disney vacation planner like Academy Travel. They’re here to help and can book your accommodations, dining, and more so you can save the most time for exploring the details around Walt Disney World. And if you’re planning a trip in the beginning of the year, there are even more artistic experiences to explore with the Epcot International Festival of the Arts! Click here for a free, no obligation quote and start planning your excursion into the creative side of Walt Disney World today.

What are some of your favorite works of art at Walt Disney World? Let us know in the comments!