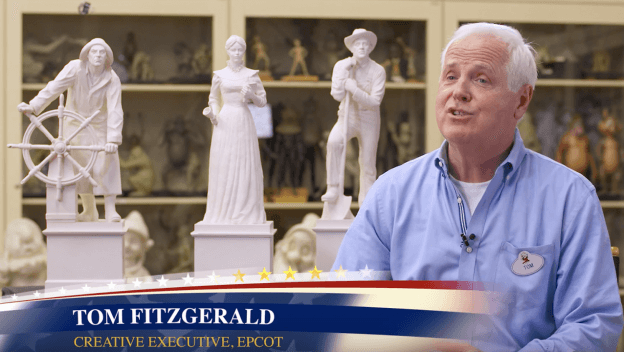 “Golden Dream,” the patriotic theme song for The American Adventure pavilion’s attraction at Epcot, was recently reimagined by Walt Disney Imagineering and some special guest musicians.

During a show hosted by American author Mark Twain and statesman Benjamin Franklin, The American Adventure hosts a tribute to some of the most iconic moments in American history. As Walt Disney Imagineer Tom Fitzgerald explains, the team likes to refresh shows to keep them current. The “Golden Dream” sequence at American Adventure has been updated several times since it opened in 1982, and the team felt it was time to focus on reimagining the anthem.

Below, see how the team worked with pop/rock music producer Harvey Mason, Jr., to give the song a modern, cinematic update while staying true to the original vision.

WATCH – BEHIND THE SCENES OF NEW “GOLDEN DREAM” ANTHEM AT AMERICAN ADVENTURE:

The American Adventure recently reopened with the updated anthem, as well as an enhanced digital projection system, new speakers, and updates for the finale sequence.

For more information on The American Adventure, visit the Walt Disney World website.