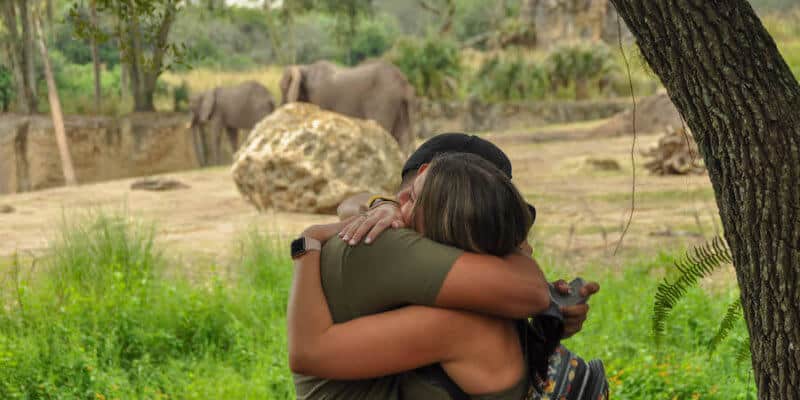 A pair of Disney guests just got engaged during one of the most memorable experiences Disney’s Animal Kingdom has to offer and we can’t stop swooning over it!

Kayla Fernandes was already having the time of her life during her Disney vacation with boyfriend Erick Gomez when the two set out for Animal Kingdom to participate in Caring for Giants. If you are unfamiliar with Caring for Giants, this is one animal experience that needs to be on your radar- Caring for Giants allows guests to take an up close looks at the park’s resident elephants in an area closer to their habitat and while learning about these beautiful creatures with Disney’s conservation Cast Members.

Both Kayla and Erick are Walt Disney World annual passholders, so when Erick decided to propose he knew he needed to make the event extra special. The couple loves seeking adventure especially while touring parks like Disney’s Animal Kingdom, so Caring for Giants seemed like the perfect opportunity for Erick to ask Kayla to marry him.

Kayla and Erick have been best friends for years, after having met in their 8th grade English class. As their relationship grew, so did their love for Walt Disney World, culminating in their decision to become annual passholders together. Knowing that Kayla’s favorite animals to see in the park were elephants, Caring for Giants gave Erick the best opportunity to pop the question in their favorite place.

To pull off the proposal, Erick shared his plans with the Cast Members working at the Caring for Giants check-in desk, Patrick and Maddie, who were both excited to help bring some extra magic to the couple’s special day. Maddie typically works as a photographer on Disney’s Wild Africa Trek, so she offered to follow along with their group during Caring for Giants to take photos of the engagement.

While Maddie went along with the tour, Patrick worked with some of the area’s Merchandise and Food & Beverage Cast Members to find ideas for ways to add some more elephant-themed magic to the couple’s day. Among the surprises, Patrick picked up for were a card congratulating the happy couple (from nearby Animal Kingdom Cast Members and the elephants of course) and some “Happily Ever After” celebration buttons.

Of course, Kayle said yes, and the Cast Members who assisted with this most romantic occasion were thrilled to be part of the big moment. Maddie said [she] “was honored to be the one to capture such a special moment for Erick and Kayla,” and Patrick noted that the whole experience is just one small part about what he loves about making magic as a Disney Cast Member.

“Knowing that our team helped create a memory they’ll have forever is easily one of my favorite parts of this job,” said Patrick following the engagement, “Adventure is out there, and I hope they never stop looking for it together!”

Are you planning to pop the question? Need some help finding the best spot in Disney to plan your wedding proposal? Academy Travel, our preferred Disney travel specialists would love to be a part of planning your special day. Their services cover everything from booking accommodations and special event tickets to simply asking for advice on what to do at Walt Disney World. Click here for a free, no-obligation quote and plan the Animal Kingdom proposal of your dreams today.

How romantic was Kayla and Erick’s engagement?! If you got engaged in a Disney park, let us know where your engagement happened in the comments!