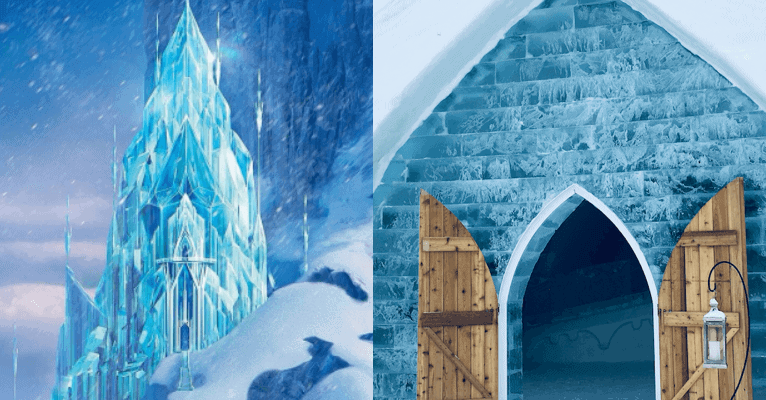 Have you ever wondered where Disney’s fabulous animators got their inspiration for the many beautiful castles draped across the backdrops of its most popular princess movies?

No doubt they “drew” from their own talents as animators (no pun intended), but there were also some tangible forms of inspiration that helped these dynamic animators dream up the lovely living spaces of Cinderella, Aurora, Jasmine, and the other beautiful iconic Disney princesses.

The many castles that inspired the ones we know as Merida’s, Sleeping Beauty’s, Rapunzel’s, and others’ are scattered across the globe. We think it’s pretty magical that there are actual castles around the world–that we can visit and see with our own eyes–behind the ones that have found their way into Disney’s many Princess stories and into our hearts. It makes the magic that much more believable. Just take a look!

It has been said that more than one castle served as the inspiration for the home Merida shared with her father, mother, and triplet brothers in Pixar’s only princess movie, Brave. But two of the castles that are reported to have been part of that inspiration stand out among the rest. Both Eilean Donan Castle and Dunnotar Castle are located in Merida’s native Scotland, and both served as inspiration for the beauty in architecture and design that would grow into Merida’s castle.

VisitScotland.com honors Pixar’s animators, who visited Scotland in the summer of 2006 and late 2007 to draw inspiration for the upcoming computer-animated film. The country’s official site states that even though Brave is set in an entirely fictional location in medieval Scotland, that “Pixar’s animators were deeply affected by the real country’s raw beauty and rich heritage.”

It seems that Pixar’s rendition of a medieval Scottish castle is very much in keeping with the castles you’ll find in the country if you visit today.

Years before Disney would release the highest-grossing animated film of all time, director of Frozen Chris Buck checked into the Hotel de Glace in Quebec City so that he could do some of his own research and decipher exactly what a structure made of ice and snow might look like. “Hotel de Glace” literally means “Ice Hotel,” so we can understand why Buck stayed here. After all, someone had to decide how animators would draw Elsa’s castle on the North Mountain after she finally made the choice to let it go after her less-than-stellar coronation.

Frozen took the box office by (ice) storm around Thanksgiving of 2013, and from January to March of 2014, guests of the Hotel de Glace could actually book the “Frozen Suite,” which was modeled after Elsa and Anna’s bedrooms inside their castle and was sculpted out of ice and snow.

Well, of course it was.

The castle belonging to Rapunzel’s parents–the King and Queen–sat high atop the fictional island of Corona in Disney’s Tangled. But if you compare a screenshot of Corona from the feature film and a photo of the French island of Mont Saint-Michel, you might be surprised at the striking similarities.

Laurent Ben-Mimoun, who worked on the 2011 movie, shared that Disney wanted the film to have a Renaissance castle situated on an island, much like Mont Saint-Michel, so the island was very much a part of the inspiration used in the movie.

The castle we see in Tangled was the work of animators inspired by a few different places and structures, most of which had a French Renaissance feel to it. For example, animators were also inspired by the chubby little towers found at the French chateau called “Chenonceau,” located in Touraine, France, about 130 miles from Paris. You can see some of that inspiration in the drawings of the castle where Rapunzel was born (and later kidnapped).

The animated Sultan’s home in the film is loosely based on the beautiful Indian mausoleum, whose name when translated to English means “crown of buildings.”

The beautiful 500-year-old Chateau de Chambord in France was reportedly the inspiration for Beast’s castle in Disney’s 1991 Beauty and the Beast, as well as the 2017 live-action remake of the classic starring Emma Watson. And we think that’s interesting.

But we’re even more intrigued by the inspiration behind the “little town” where Belle makes her home with her inventor father, Maurice, in her pre-Beast days. About six hours east of Chateau de Chambord, you’ll come upon the Alsace region of the country. Adventures by Disney even added the town of Riquewihr (in Alsace) to one of its river cruises in 2018 so that Guests could get the firsthand experience of being in Belle’s hometown.

Since it was first built in the 1100s, Chateau de Chillon in Switzerland has had many uses, aside from being used as inspiration for Prince Eric’s castle in Disney’s The Little Mermaid toward the end of the 20th century.

From the 12th century to the late 18th century, the castle played the roles of fortress, arsenal and summertime getaway residence, among others. The chateau is so beautiful, we wouldn’t mind being part of that world at all!

This Bavarian castle is rumored to not only have been the inspiration behind Princess Aurora’s castle in Disney’s Sleeping Beauty, but also part of the inspiration for the castle where Cinderella and Prince Charming lived.

It has been confirmed that Sleeping Beauty Castle at Disneyland was inspired by Neuschwanstein Castle in the German Alps. Four years after Disneyland opened, the animated feature film hit theaters and showcased the iconic structure.

The beautiful Cinderella Castle at Walt Disney World and the one in the classic 1950 film were inspired by a couple of castles. But the National Trust for Scotland regards Craigievar Castle in Aberdeenshire as the structure that most inspired Cinderella’s royal dwelling place.

The actual Scottish castle, located a little over 2 hours north of Edinburgh, is pink in color. No word yet on whether that is millennial pink or just pink, however.

Alcazar de Segovia in Spain is said to be the inspiration for the castle featured in Disney’s 1937 Snow White and the Seven Dwarfs. “Alcazar de Segovia” translates to “Segovia Fortress,” and the name seems fitting.

The words “fortress” and “dungeon” seem to go together, and you’ll remember that the Evil Queen‘s races down the staircase to the dungeon deep inside her castle when she decides she’s had just about enough “competition” from her stepdaughter Snow White. She goes to the dungeon to make a potion that will turn her into an old hag, and while’s she there, she figures, why not also make a poison apple? Yikes.

Though the castle drawn in the feature film looks very similar to Alcazar de Segovia, the two are very different in purpose. The beautiful Spanish castle originated in the 12th century, and since that time, it has served many purposes. It was once an actual fortress. Then later, it served as a royal palace and a state prison. Later on, Alcazar de Segovia served as the Royal College of Artillery and Military Historical Archive.

All we know of the castle where Snow White lived is that she stayed there with her stepmother who had an unhealthy need to be fairer than anyone (including her stepdaughter), there was a really ornate peacock-inspired throne, and an eerie-looking mask with a knack for rhyming and critiquing beauty lived in a mirror on the wall in the castle. We’ll let you decide which one is more interesting.

Which Princess’s castle is your favorite? Have you ever visited any of the castles that inspired those drawn by Disney’s animators? We’d love to hear from you in the comments section below!