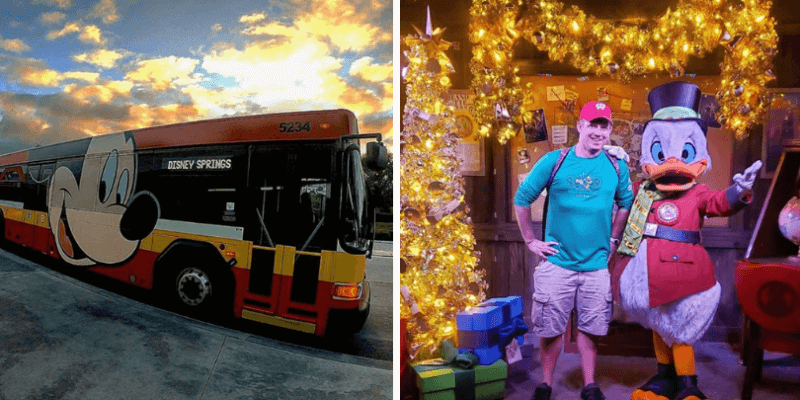 The ultimate Disney fan just completed one of the most unique challenges we’ve heard of yet: riding every Walt Disney World bus in a single day!

Brent Dodge — the Walt Disney World annual passholder who is known for visiting the theme parks every single day — is always rising to the next challenge. He has visited Disney World every day for 365 days and even set a record for it, publishes his own books all about the theme parks, and even runs social media accounts where he documents not only his daily Disney life but also the hidden magic there is to discover all across Disney property. The latest challenge he recently attempted? He rode every Disney World bus in just one day.

Dodge’s day ended up lasting over 11 hours, during which he rode around Disney property for 110 miles onboard a variety of buses that took him from Disney Springs to the Disney Resort hotels to the theme parks. There was no rhyme or reason to choosing each bus — he often would get off a bus at one destination and then get back on the first bus that showed up at the stop he had just gotten off at, as long as those buses had different character wraps. His main goal was to ride as many of Disney’s new wrapped buses (the ones with Disney characters on them) as possible. And he achieved just that!

Dodge rode on buses displayed with characters from Mickey Mouse and Goofy to Peter Pan and Cinderella, which took him to resorts like Disney’s Caribbean Beach Resort and Disney’s Contemporary Resort and so many more. Best of all? He completed this challenge on Christmas Eve!

Dodge documented his entire experience of riding every Disney bus in a day on his social media accounts as well as his YouTube video. Take a look at how the challenge turned out!

After we saw Dodge’s video on YouTube and social media posts regarding riding every Disney bus in a day, we knew we had to know more about how the idea came to be. Thankfully, Dodge was willing to share, and he gave us a rundown of how long he’s been completing challenges like this as well as how he decided upon the Disney bus challenge.

“The whole idea of my Crazy Challenges began in 2010 when people would talk about the 4 Park Challenge to me and I would always think how that wasn’t a challenge, but a Tuesday,” Dodge shared with Inside the Magic. “My friend and I created a new Challenge which we called the Crazy Challenge that consisted of doing the 5 most popular attractions in each park (so a total of 20 throughout the day) along with meeting a character, juggling in front of every World Showcase pavilion, trading three specific pins, getting a Ghirardelli sample in Downtown Disney (now Disney Springs), doing the Hustle with Cast Members in the lobby of Pop Century, along with a few more tasks. We finished the Challenge with a few minutes to spare and it became an annual tradition to do a Crazy Challenge together.”

Naturally, challenges like this evolved to include Disney transportation. Walt Disney World Resort has a variety of transportation options, from the monorail and the bus system to ferry boats and the Disney Skyliner.

“Eventually a friend sent me a video of a man getting off a subway car, running 300 yards to the next station, and getting back on. They told me I should do the same with a monorail. So I did. I got such positive feedback from it that I began to do a Crazy Challenge about once a month,” Dodge shared. “Some would be simple (trying to find Figment’s paintings in less than 35 minutes) while others were races (a race from the Partners Statue to my car where one person had to take the Ferryboat, one person the Express Monorail, and the other the Resort monorail) while others occurred during races (I did a Crazy Challenge during the Dopey Challenge this year). Eventually, my friends and I were talking about the new bus wrap designs and how I should try to ride them all. Quickly a Crazy Challenge was born resulting in me riding 110 miles on a bus for 11 hours and 5 minutes in a single day.”

Crazy Challenge is revealed! My goal is to get on every wrap design today before the day is over! I've spent the last 7 hours riding bus after bus after bus (with a run and Skyliner thrown in on occasion)! Will I make it? I don't even know, but the video will be released Friday so make sure to check it out! . . . . . #disney #disneynerd #disneyfreak #disneyfan #disneyaddict #disneyphotography #disneyigers #disneygram #instadisney #disneypic #magickingdom #fantasyland #cinderellacastle #disneysmagickingdom #cinderellascastle #dcpalumni #mostmagicalplaceonearth #disneyparks #gopro #a7s #traveller #waltdisneyworld #wdw #disneyworld #like4like #l4l #disneyside #dizcolors #wdwbde #travelphotography

Of course, when you visit the Disney Parks every single day, you probably get to the point where you want to add a little variety to your typical park days. So while challenges like this sound difficult for the average Disney tourist, they are really Brent Dodge’s normal. He shared that he has an entire whiteboard filled with ideas of challenges he plans to attempt in the future, and they keep his life interesting.

We don’t know about you, but being able to go to Disney World every day and adding challenges to mix up the typical day sounds like the ideal set up for the ultimate Disney fan.

What Disney challenge would you want to attempt on your next trip to the Disney parks? Would you ever try the Disney World bus challenge? Let us know in the comments!