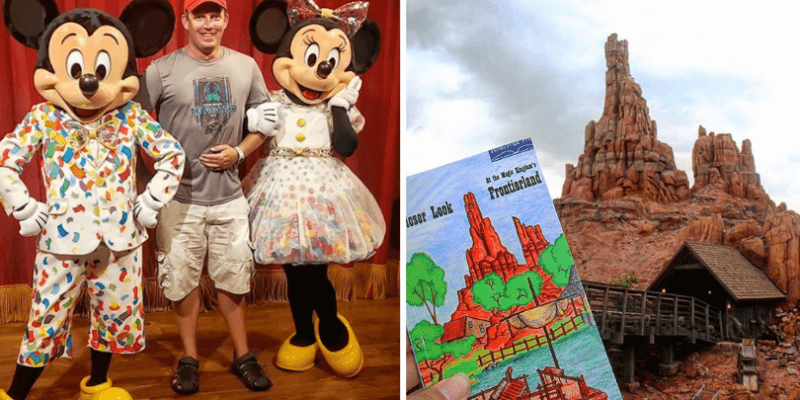 If you’re a long time fan of Walt Disney World, you may remember the guest who visited the theme parks for a record-breaking 365 consecutive days. His name is Brent Dodge, and he’s still a dedicated Disney lover who makes an effort to go to Walt Disney World every single day of the year. And now, he’s writing books about it.

“Walt Disney World and Disney mean the world to me,” said Dodge, who has been visiting the Disney Parks for as long as he can remember. “Most people talk about how it’s their escape from reality, but for me it is reality. I spend more time in the parks than anywhere else. I know the entire property better than I know my own condo complex.”

Many Disney fans will remember Dodge from an article that the Disney Parks Blog shared about him back in 2014, in which they discussed his “365 days of Disney” record.

“Going to Walt Disney World every day started off as a simple challenge for myself because people would often ask why I would go so often after moving to Orlando,” said Dodge of his years-long routine of going to the Disney World theme parks every day of the year — or at least, as often as he possibly can. “I always responded, and continue to respond, by stating a simple fact. Millions of people would give anything to go to the parks and some people save years to go. I was once one of those people and figure that I have the opportunity to live out the life most would only dream to have so why wouldn’t I live the dream life.”

Though Dodge has been visiting Walt Disney World and writing about it for years, he’s now three books into his latest series, which takes a closer look into the nitty-gritty details that make the Walt Disney World theme parks as magical as they are.

Dodge’s A Closer Look book series started off as a series of posts on his website in which he delved deeper into select portions of the Disney Parks. He would write about their history and details, as well as fun, lesser-known facts. But later, this series of posts sparked the idea for a book series.

“I started to realize that more people were reacting to the shops and restaurant portions than I had anticipated,” wrote Dodge to Inside the Magic. “”One day my brother offhandedly said to me that even though he isn’t a big Disney fan, he found the Closer Look section of my site to be fascinating and suggested I do a book about the entire Magic Kingdom. I started to realize that the book would be way too long and take forever to write due to the detail I wanted to go into, so I started to break it down by land.”

And that he did. So far, there are three published books in Dodge’s A Closer Look series, and each describes every element of the specific lands of the Magic Kingdom. The three books that Dodge has already published examine Fantasyland, Liberty Square, and Frontierland, the latter of which is the most recent — Dodge just published it this fall.

The writer and Disney enthusiast walked us through his book writing process. Of course, there is a lot of research needed to bring these books to life, so here’s what Dodge does every time he starts writing a new installment in his series.

“The first thing I do is take a camera and make a three or four-hour video of every inch of the entire land including each shop, restaurant, and attraction. After going through and jotting down notes I then return to the land and question every cast member I can find about details, fun facts, etc. that only the cast may know,” shared Dodge. “After adding that to my list I would then go onto research at home about who different people referenced in the land may be. Whenever I have been stumped I have contacted the founder of the Walt Disney Archives Dave Smith who sadly passed away earlier this year. Depending on how hectic my life is it’s taken anywhere between one year and three and a half to go through the whole process.”

Dodge wants to cover all of the land of the Walt Disney World Resort theme parks, as well as the west coast theme parks at Disneyland Resort. For now, you can purchase his books on his website, From Screen to Theme, and follow along on his Instagram for daily Disney posts.

Want to plan your own trip to Walt Disney World so you can experience the magic of the hidden details of the theme parks just like Dodge does? The Authorized Disney Vacation Planners at Academy Travel can help! Academy Travel agents can plan every part of your Disney vacation, from booking your dining reservations and purchasing your Disney Parks tickets to helping plan your visit to each of the four parks and even reserving your Disney Resort hotel stay. They can even help you save money and share their tips for navigating Disney World, including helping you use the My Disney Experience app! Click here for a free, no-obligation vacation quote from Academy Travel.

Would you go to the Disney Parks every day if you could? Do you like reading Disney books as much as we do? Let us know in the comments!