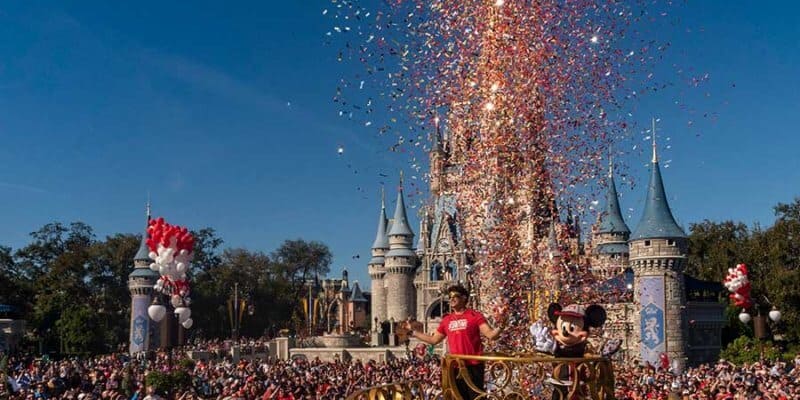 “I’m going to Disney World!” — The five sweet words that the Super Bowl MVP gets to yell after winning the biggest game in football, the Super Bowl.

This year’s Super Bowl is being played between Tom Brady and the Tampa Bay Buccaneers and Patrick Mahomes and the Kansas City Chiefs (who won last year’s Super Bowl) at Tampa’s Raymond James Stadium, which is only about 75 miles from Magic Kingdom at Walt Disney World.

With the game being so close to the Most Magical Place on Earth, as well as the current pandemic, a lot of people have been wondering if the Super Bowl MVP would carry on the tradition this year and yell the famous line after the big game this Sunday.

Well, Orlando Sentinel released a story on the history of this Super Bowl tradition and reported as if this will continue on this year, despite the pandemic.

… we could see a repeat customer at Disney World next week. Patrick Mahomes, quarterback of the Kansas City Chiefs was the honoree last year, and current Tampa Bay Buccaneers star Tom Brady came, alongside teammate Julian Edelman, in 2018, back when Brady led the New England Patriots to Super Bowl victory. (He also said “I’m going” in 2002 and 2004.) Mahomes, Brady and their respective teams face off Sunday.

However, Disney Parks Blog has now confirmed that even though the Super Bowl MVP will still shout these words, there will not be a parade at Walt Disney World this year.

Patrick Mahomes was the Super Bowl MVP last year and visited the Most Magical Place on Earth after the big game. We could see Mahomes say these words if he is named the MVP for the second year in a row.

Another possibility is that Tom Brady, who has also won the title of Super Bowl MVP in the past, say “I’m going to Disney World” Sunday evening.

Mahomes and Brady will face off with their respective teams on Sunday, February 7 at 6:30 PM EST for Super Bowl LV.

Who do you think will win Super Bowl MVP this year? Are you excited to see the tradition being continued? Let us know in the comments below.

This article has since been updated to provide the most up-to-date information.