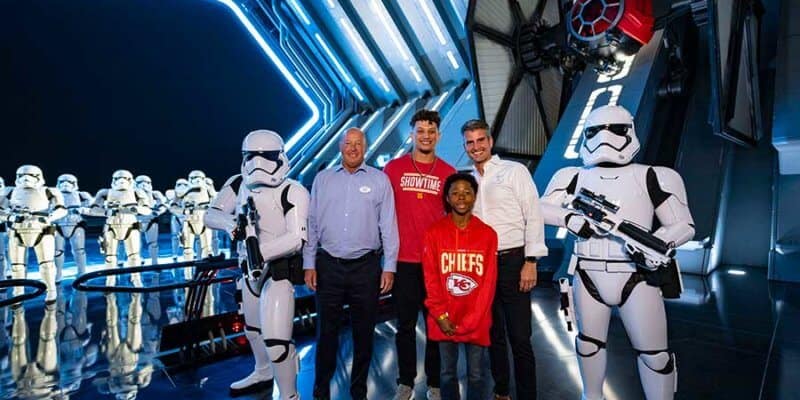 Only hours after he celebrated his team’s Super Bowl victory against the San Francisco 49ers, MVP Patrick Mahomes set off for Walt Disney World to get ready to celebrate even more.

He was the star of the televised Super Bowl victory parade at Magic Kingdom yesterday afternoon. He made his way along the parade route with Mickey Mouse by his side as confetti filled the air above them and adoring fans crowded along the route to catch a glimpse of Mahomes and shout out congratulations to him.

He thanked fans at Disney World and at home for their support. But Mahomes wasn’t celebrating alone; he was joined by 10-year-old Nathaniel, a child from Texas who participated in the parade as part of his dream come true granted by the Make-A-Wish Foundation. But the dream didn’t stop there. Nathaniel got to spend the magical day with his new friend, Patrick Mahomes.

Together they traveled to a galaxy far, far away at Star Wars: Galaxy’s Edge at Disney’s Hollywood Studios. While exploring the planet Batuu, Mahomes and Nathaniel got to experience The Rise of the Resistance attraction (and they didn’t have to wait for their boarding group to be called!).

Seventeen other children whose dreams came true thanks to the Make-A-Wish Foundation got the chance to spend time with Mahomes as well. They got to shake hands with Mahomes and even received special footballs courtesy of the Super Bowl MVP. The children were hosted by Disney Parks Chairman Bob Chapek and Disney World President Josh D’Amaro.

“Disney and Make-A-Wish have been inseparable for 40 years. We’re both in the business of making wishes come true,” said Chapek.

Did you watch the parade yesterday, or were you there in the crowds to cheer for Mahomes? Let us know about your experience in the comments section below!