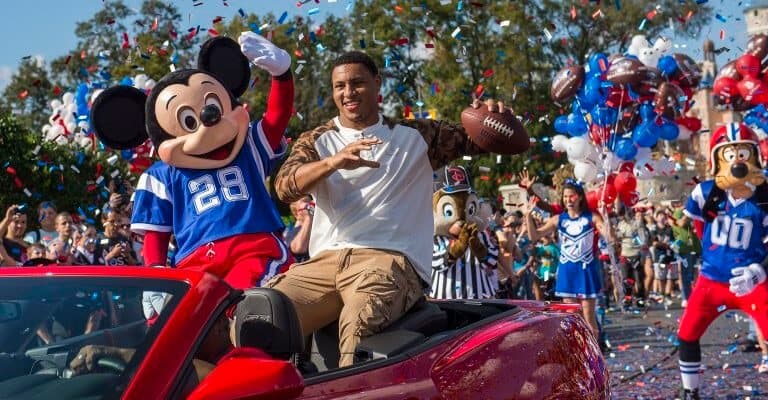 There are many ways that football fans pregame before the Super Bowl! Some spend the day making nachos and chicken wings with a beer in hand, and a few others head to Walt Disney World.

It is always interesting to note when the best times are to visit Disney World. Holidays typically flood the parks, and regular days are often hit or miss in terms of crowds — but knowing that you can show up on a certain day to little crowds is a real treat.

With the Super Bowl LV Sunday well-underway, whether Disney World would be packed or empty may have been a question on many Guest’s minds. Especially considering the 55th Super Bowl is being held just around an hour away from Disney World.

Saturday boasted long wait times at Magic Kingdom, EPCOT, Disney’s Hollywood Studios, and Animal Kingdom, with all Disney Park Pass reservations sold out. Today, however, I was able to log into the My Disney Experience app and snag a reservation at any of the four parks.

If we take a look at Thrill Data’s (@ThrillData) recorded wait times at all four parks today, we can see that Saturday was much busier than Super Bowl Sunday, with Magic Kingdom’s wait times averaging under 25 minutes today.

This weekend at the #DisneyWorld parks. Short waits this #SuperBowl Sunday at the #MagicKingdom pic.twitter.com/VSYd3OlfSF

Disney Guest @Nicollemharrell took to Instagram to post a photo of Disney’s Hollywood Studios. If you swipe through it is clear that there were plenty of Guests at the park, but the crowds were seemingly very manageable.

EPCOT seemed to be the busiest park of the day, but that may be due to EPCOT’s Festival of the Arts which is a limited-time event that pulls in large crowds.

Interestingly enough, even though the Super Bowl MVP shouts out the classic “I’m going to Disney World!” line every year, not many NFL fans want to be in Disney World the day of the big game.

Although the  Super Bowl parade will not occur at Disney World, the famous line will still be shared. This year’s Super Bowl is being played between Tom Brady and the Tampa Bay Buccaneers and Patrick Mahomes and the Kansas City Chiefs (who won last year’s Super Bowl) at Tampa’s Raymond James Stadium — we just need to now wait to see who will be featured in the classic commercial.

That being said, for those who aren’t cooking finger food before the Super Bowl, we now know that it seems that Disney World is a great place to spend the day with lesser crowds before the big game!

What other days do you think Disney World has lower crowds? And we have to ask, are you a Buccaneers fan, or Chiefs fan?

Comments Off on Super Bowl Sunday Crowds at Disney World