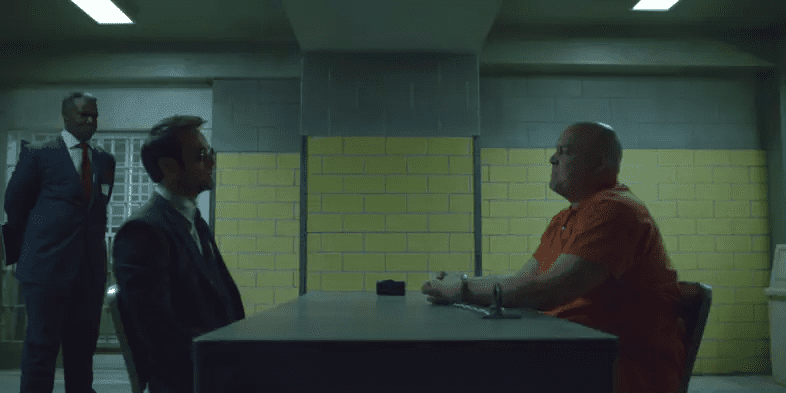 Now, Marvel Cinematic Universe fans’ dreams are coming true as both Cox and D’Onofrio have officially made their MCU debuts — in Spider-Man: No Way Home (2021) and the Disney+ Original Hawkeye series, respectively.

62-year-old D’Onofrio recently spoke out about making his return as the popular villain, noting that the physical changes he has to undergo to play Marvel Comics favorite, Fisk, are “just not healthy anymore,” so some CGI effects were used to alter his appearance for the Jeremy Renner and Hailee Steinfeld-led series.

He shared, “I can’t put on that much weight anymore because of my age, it’s too hard to take off and it’s just not healthy anymore,” then went on to say:

“In a couple of shots, there were [camera perspective tricks]. But we tried a couple of different looks and the one we came down to was some extra shoulders, and extra chest, and extra girth around the middle. But I did [put on weight], I always go up about somewhere between 15 and 20 pounds when I play Fisk. Because he needs that round face… I have to put on additional weight to get some weight [in my face], to fill out my cheeks a little bit more, and then the rest [is costuming and effects].”

While neither Marvel President Kevin Feige nor any other executives have confirmed where D’Onofrio’s Fisk will show up again in the MCU, it is presumed that the character will make his return in Hawkeye spinoff, Echo, which will star Alaqua Cox reprising her role as Maya Lopez/Echo.

In the Marvel Comics universe, Kingpin and Echo have a close relationship, as he helped to raise her from childhood.

Are you looking forward to seeing Daredevil characters make their mark in the Marvel Cinematic Universe?