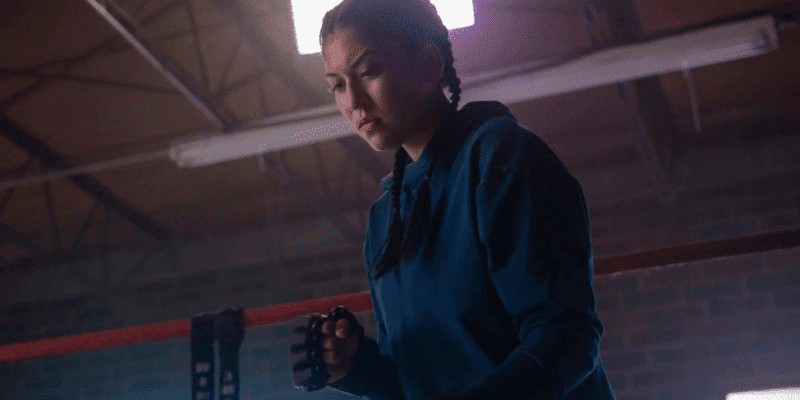 Hawkeye Episode 6 — “The Boss” — promises to place Vincent D’Onofrio’s Kingpin front and center for the hotly anticipated season finale. The guy Clint Baron has been “worried about this whole time” has an important connection to the action so far. Newcomer Alaqua Cox as Maya Lopez — Echo —  is determined to take down Ronin at any cost. However, Echo has learned that her “uncle” Wilson Fisk may have been responsible for her father’s death.

What is the backstory of Echo, Hawkeye, and Kingpin in the comics? What is the place of Maya Lopez in the Marvel Cinematic Universe? Read on to learn more.

Related: Who Is Clint Barton / Hawkeye In the MCU?

Who is Marvel’s Echo, AKA Maya Lopez?

Alaqua Cox plays Echo in the Hawkeye Disney+ series in her debut acting role. Cox is a Native American — a member of the Menominee and Mohican nations. Cox is an amputee and only the second deaf actor to portray a deaf character in the Marvel Cinematic Universe — following Lauren Riddloff’s turn as the speedster Makkari in Marvel’s Eternals. Hawkeye‘s leads, Jeremy Renner (Clint Barton) and Hailee Steinfeld (Kate Bishop), learned basic ASL to better communicate with Cox.

In an interview with EW about her physically demanding role, Alaqua Cox discussed the importance of authentic representation in media, saying:

“People with a disability like me can do anything: We can fight, we can flip, we can fall. I’m excited for people to say, ‘Wow, she can do that?'”

Who is Echo in Marvel’s Hawkeye Disney+ series?

Actress Alaqua Cox was introduced in Hawkeye Episode 2, “Hide and Seek” as Maya Lopez — otherwise known as the lethal enforcer for New York City’s Tracksuit Mafia, Echo. Despite being introduced as a villain, Maya Lopez enters the series with a sympathetic background story that foreshadows her expected hero turn.

Maya Lopez was born deaf and raised by her father. A member of the Cheyenne tribe, Maya’s father raised her to use her hearing impairment as an unexpected advantage — observing the world around her with near-superhuman levels of attention. In the pages of Marvel Comics, Echo possesses photographic reflexes — an ability that enables her to replicate any physical action that she sees perfectly. Maya demonstrates this ability as she trains to become a hand-to-hand combatant and skilled martial artist.

In Hawkeye Episode 3 — “Echoes” — audiences learn why young Maya Lopez set out on a path of vengeance. After looking into the underworld mafia activities of her father, William Lopez (Zahn McClarnon), Maya happens upon a deadly scene. She encounters Ronin — the vigilante alter-ego of Clint Barton. Barton had taken on the mantel of the bloodthirsty Ronin following his family’s disappearance during Thanos’ Blip that snapped half of all living things out of existence for five years.

Lopez encounters Ronin as he slices through a hideout of Tracksuit Mafia that includes her father, William Lopez. Witnessing her father killed at the hands of Ronin, Echo dedicates herself to discovering the identity of Ronin and destroying him. Following her father’s death, Maya is essentially raised by her “uncle” — who encourages her proficiency in the martial arts, intending to forge her abilities into a weapon for his own designs. That uncle turns out to be the big guy himself, Kingpin — portrayed by Vincent D’Onofrio, who played Wilson Fisk in the canceled Netflix Daredevil series.

Who is Echo in Marvel Comics?

The storyline and aesthetic of the Hawkeye series on Disney+ — particularly the buddy cop dynamic shared by Kate Bishop and Clint Barton — is primarily inspired by Matt Fraction’s 22-issue series Hawkeye that began in 2012. While Echo does not factor into this particular Hawkeye comic book arc, the Marvel Comics version of the character has significant ties to Hawkeye, Daredevil, Moon Knight, and the gritty “street-level” crime fighter stories from Marvel.

Echo debuted in 1999 in the pages of Daredevil Vol. 2 #9. Maya’s father works as an enforcer for Kingpin before being executed on Wilson Fisk’s orders. Kingpin raises Maya Lopez as his own daughter, sending her to expensive private schools for deaf students. While studying dance, Maya Lopez discovers her ability of photographic reflexes. When Fisk learns of Lopez’s power, he tricks her into believing it was Daredevil — Kingpin’s archnemesis — that had killed her father. As she sets off on a path of revenge, Lopez takes the name Echo — referring to her ability to mirror physical actions.

Echo is currently the host of the powerful Pheonix Force in Pheonix Song: Echo — a story from Marvel Comics that debuted in the summer of 2021. The uber-powerful cosmic ability made famous by Jean Grey of the X-Men, the Pheonix Force makes Echo one of the most powerful beings in all of Marvel Comics.

Echo in the Marvel Cinematic Universe

While it’s unclear if Vincent D’Onofrio’s Kingpin in Hawkeye shares the same history as the Netflix Daredevil incarnation of the character, audiences were thrilled to see D’Onofrio back as the fan-favorite villain. Hell’s Kitchen lawyer Matt Murdock, Daredevil himself, appeared in Spider-Man: No Way Home (2021), giving Peter Parker (Tom Holland) some legal advice. It remains to be seen how much of the street-level Netflix series continuity — from Daredevil, Jessica Jones, Luke Cage, Iron Fist, and The Punisher — will wind up making it to Marvel Cinematic Universe canon.

Will Echo turn out to be a friend or foe to Hawkeye?

Marvel fans wonder what to expect from Echo in Marvel’s Hawkeye series and the upcoming Echo series. If Alaqua Cox’s Maya Lopez continues to take cues from Marvel Comics, there are a few noteworthy aspects to consider. After Lopez’s initial story as Echo in the comics, she takes on the mantle of Ronin — the same masked vigilante identity Clint Barton uses in the Marvel Cinematic Universe. In fact, Echo is the first-ever character to become Ronin — an identity she passed on to Clint Barton.

Despite Echo’s desire for revenge — and her allegiance to the Tracksuit Mafia — considering her Marvel Comics history, fans anticipate she’ll make the turn to hero in the upcoming finale, Hawkeye Episode 6. In the comics, Echo joins The New Avengers. With the MCU’s Avengers currently disassembled, could we see the seeds being planted of Echo joining a revamped Avengers lineup in the future?

Related: Kathryn Hahn Is Getting a ‘WandaVision’ Spinoff for Agatha Harkness

Marion Dayre — known for her work on the critically acclaimed series Better Call Saul — was announced as head writer of Marvel’s Echo series on Disney+. The series is expected to begin production in Atlanta in Spring 2022.

What do you think of Alaqua Cox as Echo in Marvel’s Hawkeye series? Let us know in the comments!

Comments Off on Who is Echo in Marvel’s Disney+ ‘Hawkeye’ Series?