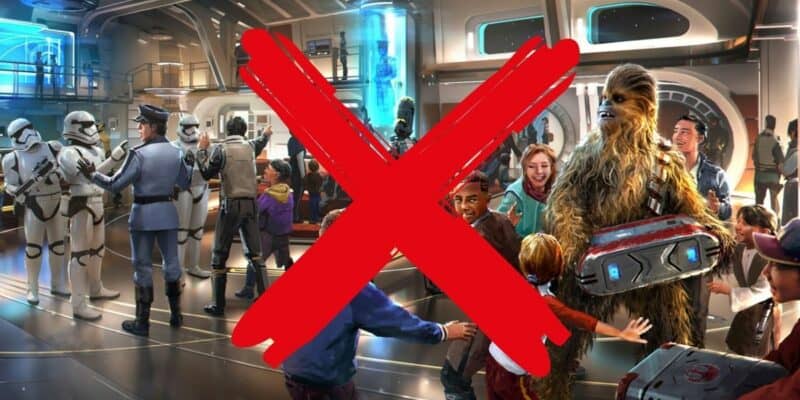 Recently, Disney fans have been treated to numerous sneak peek looks onboard the Halcyon, but it seems Star Wars fans are not impressed by what they see.

At Destination D23, held at Walt Disney World last month, Chairman of Disney Parks, Experiences and Products Josh D’Amaro revealed his own experience onboard the Galactic Starcruiser with a sneak peek video, while on ABC’s The Wonderful World of Disney: Magical Holiday Celebration, Disney revealed a first look at entertainment onboard Star Wars: Galactic Starcruiser.

This week, Disney removed its videos of the Starcruiser from its social channels without comment. The original Tweet link, as well as the YouTube link, now show that the content has been taken down.

Criticism for these videos was high, with many Star Wars fans disappointed in the look of the Halcyon. Most fans agreed that the Starcruiser does not look up to Disney standards of Imagineering and are hoping that the hefty price tag lives up to expectations in March.

Now, it seems some of these fans have been canceling their stays aboard the Galactic Starcruiser, with months that were fully booked having sporadic days available.

Inside the Magic noticed that during the earlier months the Starcruiser is open – March, April, and June 2022 – numerous openings have suddenly become available for booking when these months were fully booked.

Note that a deposit of 20% of the package is due at the time of booking if your reservation is made 91 or more days prior to arrival. This means if your total package is $6,000, a deposit of $1,200 is due in order to reserve.

If you decide to cancel 90 days or more prior to arrival, a full refund will be given. As we are just at the 84-day mark before the first launch, it is interesting we are seeing so many cancelations coinciding with these sneak peek videos and cancelation policy deadline. For cancellations 31 to 89 days prior to arrival, you will only be given 50% back. For cancellations within 30 days, no refund will be given.

Social media has been rife with people commenting on disappointment surrounding the Starcruiser and their desire to cancel. OkayLasVegas7 on Twitter was firm on their opinion that they would cancel their trip onboard:

I love Disney as much as the next person, but if you’re spending $6k for two nights for 4 people, I would immediately cancel my trip after seeing this trailer

https://t.co/OXWVF9Ph9s I love Disney as much as the next person, but if you're spending $6k for two nights for 4 people, I would immediately cancel my trip after seeing this trailer #Disney #StarWars #galaticstarcruiser

Another user shared a view about Disney’s approach to the Starcruiser Imagineering:

The two-night adventure costs approximately $6,000 for an average family of four, and includes the following on every voyage to a galaxy far, far away:

We’ll have to see in March 2022 when the first reviews come in from Star Wars: Galactic Starcruiser’s first Guests, but for now it seems many fans are not impressed with the initial insight.

The Outer Rim planet of Batuu opened to Disney Parks Guests on May 31, 2019 at Disneyland Park in Anaheim, California, and on August 29, 2019 at Disney’s Hollywood Studios Park in Orlando, Florida to mixed reviews from diehard Star Wars fans.

Do you have a booking onboard the Galactic Starcruiser? What do you think of the sneak peeks so far?