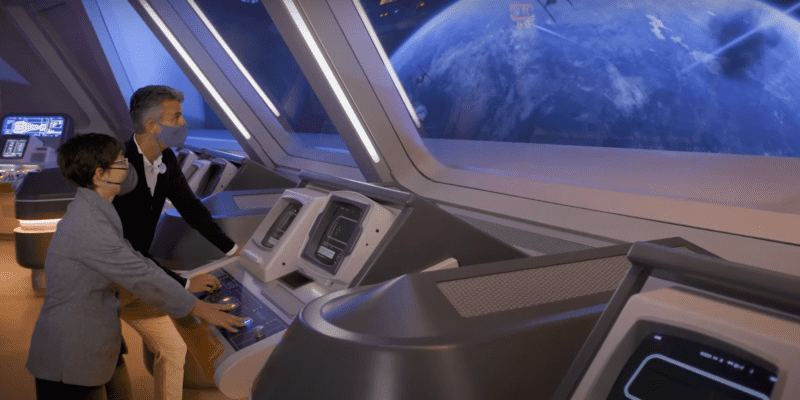 Disney is constantly innovating their space to ensure that Guests are not only experiencing the latest technology but ensuring that they are able to enter into multiple worlds of fantasy, many of which they have adored from their couch or local movie theater for years.

The George Lucas-created fandom, Star Wars, is one that quickly integrated itself into the Parks once acquired by Disney. It is no surprise to hear that fans wanted to enter into a galaxy far, far, away once they heard of Disney having control of the IP. We saw the outer rim planet Batuu come to life as Star Wars: Galaxy’s Edge at both Disney’s Hollywood Studios in Walt Disney World and Disneyland Park at Disneyland Resort.

At the moment, the land is also under construction to expand into Disneyland Paris. But lucky for Star Wars fans, Disney wanted to do more than just recreate the Millennium Falcon, or blow Guests away on Rise of the Resistance. Disney’s newest Star Wars endeavor is the Star Wars: Galactic Starcruiser hotel, which is set to open on March 1, 2022. Guests are able to walk into their own Star Wars film while flying through the galaxy on the Halcyon, meeting characters from the films like Chewbacca, dressing up, and exploring the ship and its challenges.

The cost for a family of four will average around $6,000.00, which is a heft price tag, but has not caused the Starcruiser experience to be any less coveted as many trips are already sold out. That being said, when the sneak peek was shown of the Starcruiser by Disney, the feedback was not all positive. Many seemed to not be impressed by the ship in comparison to its price tag, which may have created some cause for concern from Disney.

Now, although we have no idea why, Disney has removed the most recent look into the hotel off their social channels. The original Tweet link, as well as the YouTube link, now show that the content has been taken down. Perhaps this may be in conjunction with the public criticism the hotel has faced; however, there may also be another reason for the removal. As Disney has not commented on this, we cannot be sure.

We will likely continue to receive information regarding the Starcruiser as we continue to approach the opening date, so if you are sad to see the inside look disappear, do not fret; there will surely be more on the way — especially after March 1!

For now, Guests can read what Walt Disney Imagineer Ann Morrow-Johnson, has shared in terms of what Guests can anticipate on their Halcyon journey:

It’s not really a hotel, it’s not really immersive theater, it’s not really a theme park, it’s not really gameplay — it’s kind of an intersection of all of those things where Guests get to play a role and choose their path within the Star Wars story. So when you come on board, you’ve got everything from your food, your activities, your accommodations onboard as well as your shore excursion in kind of a traditional cruise-style model, if you will. But of course, you’re on the one fateful journey that goes horribly, horribly wrong, and you get wrapped up in the action. So depending on the characters you meet, you might choose to help different folks and your story will unfold differently as a result.”

What did you think of the Starcruiser? Let us know in the comments below!