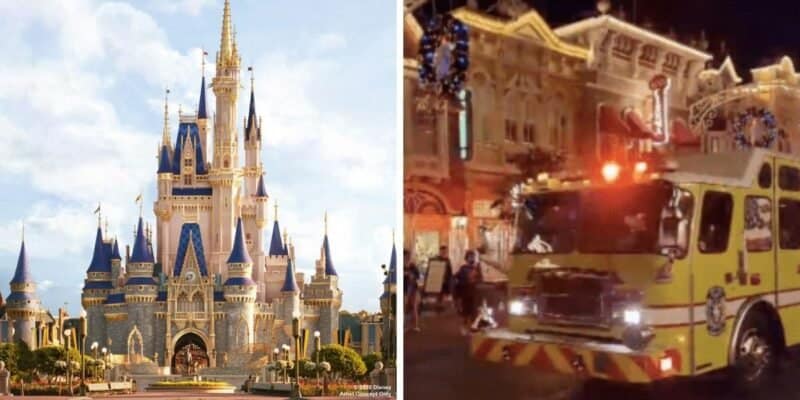 Though theme parks have a variety of health and safety protocols in place, with thousands of Guests enjoying the magic of theme parks daily, accidents, falls, and injuries are sometimes an unwanted memory gained from a trip.

Walt Disney World Resort in Orlando, Florida may be “The Most Magical Place on Earth” but sometimes incidents happen at the Resort no matter how safe they are or how well-trained the Cast Members members are.

And a recent unfortunate death on Disney property has made Disney’s team of first responders realize their worst fear: that short staffing is endangering Guests and, sadly, proving to be fatal.

According to the Orlando Sentinel, Walt Disney World’s firefighters and paramedics say they are bracing to be stretched over the busy holiday period, consistently relying on outside fire departments to respond to calls or take Disney Guests to nearby medical facilities.

The union they are part of is currently in negotiation with the district to push for more first responders amid the staffing issue. Tim Stromsnes, the union’s communications director told the Orlando Sentinel:

“We’re putting people who are visiting Disney in danger.”

The short-staffing claims are coming after a Disney Guest sadly passed away recently in a hotel near the Magic Kingdom theme park.

This past Sunday, first responders received a call about a woman having a heart attack at the Bay Lake Tower at Disney’s Contemporary Resort.

According to union members of the Reedy Creek Fire Department, the only rescue vehicle for the area was on another call. The department’s call log shows a medic team arrived within 9 minutes of dispatch, but it took over 13 minutes for a rescue unit from another area on Disney property to arrive and 20 minutes before the woman was given epinephrine, a critical treatment. Unfortunately, the woman died that afternoon.

Jon Shirey, president of the Reedy Creek Firefighters Association, told the Orlando Sentinel that if more responders had been available, the woman would have had a better chance of survival:

“Time is tissue; time, in this case, is life-saving. The average person has about four to six minutes to be in cardiac arrest without some of these life-saving treatments before there’s permanent brain damage or irreversible death.”

“The safety of everyone who comes to Walt Disney World Resort has always been extremely important to us, and we are grateful to all the first responders who continue to keep our property safe.”

Back in March 2020 at the start of the COVID-19 pandemic, the Reedy Creek Improvement District reduced staffing to avoid layoffs when the theme parks were forced to shut down. The district paid EMT staff’s salaries for 16 weeks while they were at home.

Now, the Resort’s emergency services team is claiming they are not adequately staffed to respond to incidents around Walt Disney World.

Eryka Washington, Reedy Creek spokeswoman, told the Orlando Sentinel that Reedy Creek prioritizes safety and ensures the fire department has “appropriate levels of fire and medical services at all times.” She added that the response times for the call from Bay Lake Tower were normal and four units were at the hotel within 14 minutes of the call.

Stromsnes claims that the fire department used to have two rescue teams assigned to the Magic Kingdom area of the Resort in Florida, but the reduced staffing has led to gaps in the coverage, leading to the longer response time experienced during the heart attack incident.

Sean Pierce, a lieutenant paramedic, said he started working at Reedy Creek in 1997, when minimum staffing was 30 personnel per shift. He said as calls for help increase and the resort expands, firefighters are expected to do more with less.

Before the COVID-19 pandemic, the Disney fire department had 32 firefighters across eight ambulances and four fire engines per shift, according to Shirey. The Orlando Sentinel continues:

During peak times, Magic Kingdom used to have up to three medic units of two people each in the park, while Epcot and Hollywood Studios had two and Animal Kingdom one, Shirey said.

Now, all parks except Magic Kingdom have one medic unit in the park, he said, placing two people in charge of the initial medical response for thousands of guests and staff. Magic Kingdom has two units, but their shifts only overlap during peak hours, Shirey said.

Only this week, the fire department responded to a well-publicized incident that occurred at Magic Kingdom.

A small fire broke out near Cinderella Castle that caused Cast Members to evacuate the area surrounding the famous Park icon. A call came into the fire department for an “electrical fire on a junction box outside the castle.”, and that fire personnel treated a security guard who inhaled dry chemicals from a fire extinguisher.

The district’s website does in fact reveal that it is hiring firefighters and paramedics, starting January 2022. The Orlando Sentinel adds:

When the union has brought up its concerns, the response has been that the call volume does not show the need for larger staffing, Shirey and other firefighters said.

“They’re not worried about staffing for the ‘what if’ calls, but … that’s exactly what we’re here for,” Shirey said. “We are here for those ‘what if’ situations, those truly traumatic incidents, and so to not staff with that in mind just seems kind of foolish.”

On June 14, the union’s secretary Pete Simon wrote to Greg Hale, Disney’s chief safety officer, detailing the continued issues regarding understaffing amid increasing call volume. Hale apparently responded that the matter should be discussed with the fire department.

Sadly, Shirey noted that a Disney Guest dining at the Boathouse restaurant in Disney Springs suffered a seizure five days later and Reedy Creek did not have an ambulance available:

“Had this call been of a more serious, life and death matter, I can assure you this Guest would be dead,” Shirey wrote. “They would not just be dead, but they would have died in front of quite the large audience of fellow diners, all wondering why the fire department sat on scene for nearly an hour instead of transporting. For my crews’ sake, for the sake of the fire department and Disney reputation, I urge you to at least dig into this issue a bit further.” Shirey said Hale did not respond.

Inside the Magic is saddened to hear about the Disney Guest’s passing and our sincerest condolences and prayers go out to her family.