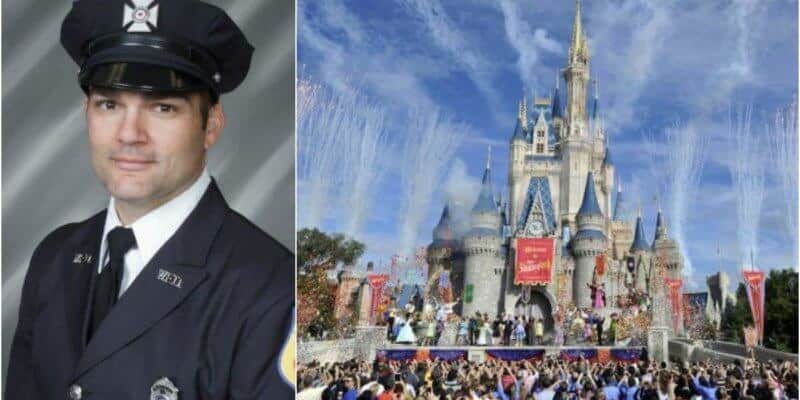 Early Wednesday, Nov. 13 a veteran firefighter died just hours before departing to his family vacation to the Walt Disney World Resort. Authorities in Worcester, Massachusetts are stating that his ladder crew got trapped while searching for residents in a four-alarm fire.

The Menard family was scheduled to depart for a vacation to Disney World after his shift ended Wednesday, according to Michael Papagni, president of the city firefighters’ union.

“They are now instead planning a hero’s sendoff,” he said.

“Lt. Menard heroically and selflessly saved his crew, helping a probationary firefighter to the stairs and then returning to rescue another trapped firefighter, assisting him out the window,” Worcester Fire Chief Michael Lavoie said.

Lt. Jason Menard, 39, was among the firefighters who responded to calls of a fire on the second floor of a multifamily home, with a baby possibly trapped on the third floor, his department said in a statement.

“This is an extremely difficult day for the Worcester Fire Department,” said Chief Michael Lavoie. “Lieutenant Menard’s heroic actions saved the life of one of his crew members.”

The fire at 7 Stockholm Street was first reported at 12:58 a.m. Initial reports were for a fire on the second floor, with a baby possibly trapped on the third floor.

Additional reports state that Menard, three other firefighters, and a resident from the building were rushed to the hospital. Two firefighters have been treated and released. A third remains hospitalized in serious but stable condition, the chief said. The resident was treated for serious injuries as well.

Menard had been a firefighter with the Worcester Fire Department since 2010.

“He was a passionate fire officer who absolutely loved being a firefighter,” Lavoie said. “He took his job very seriously, performed it admirably, and his dedication to the residents of Worcester was unwavering.”

The cause of the fire remains under investigation by the Worcester Fire Department, Worcester Police Department, and the State Police assigned to both the State Fire Marshal’s Office and the Office of Worcester District Attorney Joseph Early.

A fundraiser was set for the family up through the Greg Hill Foundation, the nonprofit of the WEEI host, formerly of WAAF. It started with a modest goal of $15,000. But by Thursday morning, the fundraiser had taken in nearly $130,000 in donations.

If you would like to learn more about how to continue helping this family, visit the fundraiser link here for more information.

Lieutenant Menard leaves behind his wife Tina and 3 children, and his parents.

Our sincerest condolences and prayers go out to this family.