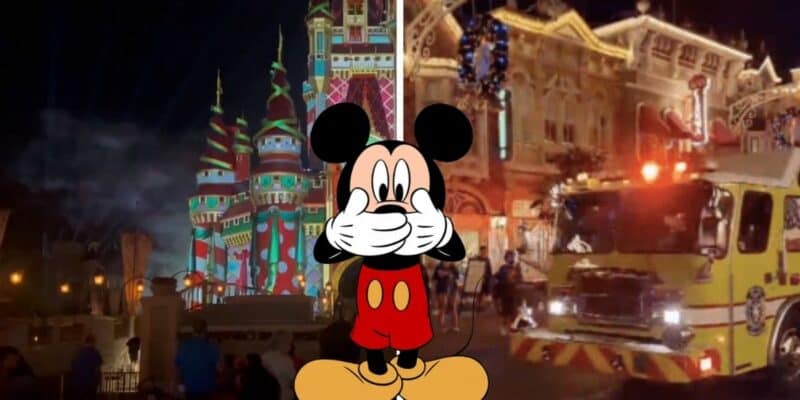 Sirens are not what Disney Guests are used to hearing as they enjoy their day at Magic Kingdom, but Guests got an unexpected surprise last night at the Walt Disney World Resort when a small fire broke out near Cinderella Castle.

Three emergency vehicles were unusually brought down Main Street, U.S.A. on Tuesday evening, and Disney Guests present in Magic Kingdom during the emergency situation have been sharing their experiences, videos, and commentary.

Disney Parks strives to provide an environment for Guests and Cast Members that is safe, with extensive health and safety measures especially during the COVID-19 pandemic.

First-aid teams, Orange County sheriffs, and the Reedy Creek fire department are all on hand for any rare accidents or incidents that occur on Disney property. Last night, however, Guests experienced something totally unexpected in the form of fire trucks driving down Main Street U.S.A. to attend to a fire in the theme park.

According to Orlando Sentinel, a small fire broke out near Cinderella Castle that caused Cast Members to evacuate the area surrounding the famous Park icon.

The Walt Disney Company released a statement declaring that the fire was small and that thankfully no Guest, Cast Member, or emergency responder was hurt:

“There was a small fire in Magic Kingdom. The fire was quickly extinguished by fire extinguishers. No one was hurt.”

Jon Shirey, president of the Reedy Creek Firefighters Association, confirmed that around 6:45 p.m., a call came into the fire department for an “electrical fire on a junction box outside the castle.”, and that fire personnel treated a security guard who inhaled dry chemicals from a fire extinguisher.

The cause is still pending investigation by the Fire Marshal, and we will provide updates when any major news is released regarding the Magic Kingdom fire.

Guests may be familiar with the widely-known “myth” at Walt Disney World that Magic Kingdom has Utilidors built underneath the theme park on the ground floor (Magic Kingdom is actually on the second floor).
Normally, emergency vehicles and Cast Members move around the Park out of sight through these corridors to avoid the main areas, but it seems last night, firefighters needed to get to Cinderella Castle as quickly as possible, meaning they had to drive down Main Street, U.S.A. in Magic Kingdom.

Of course, many Guests got to witness the situation unfold at Magic Kingdom and have shared their experiences and observations on social media.

Beth on Twitter shared a video that appears to show the moment the smoke appeared next to Walt Disney World’s famous castle, with Guests believing it to be fireworks:

#magickingdom #smoke #fire #WaltDisney #WDW Smoke outside of the castle. We caught the exact moment on camera.

Smoke outside of the castle. We caught the exact moment on camera. pic.twitter.com/rXnRFQX2Zn

Emily shared a video on social media of the three emergency vehicles in front of Cinderella Castle, with one Disney Guest being overheard saying “I guess that smoke we saw wasn’t supposed to be there”:

As reported yesterday, The Coaster Crew shared a video to Twitter showcasing the procession of fire trucks and the sirens down Main Street:

This is definitely something we have never seen in all our years of visiting The Magic Kingdom… @WDWNT @InsideTheMagic pic.twitter.com/vWR7Cdhzw5

Beth additionally posted a crazy video showing how packed Main Street, U.S.A. was in the aftermath of the fire trucks driving through:

The crush after the fire trucks at WDW #WDW #Disney

The crush after the fire trucks at WDW #WDW #Disney pic.twitter.com/Z8dmzJiJZu

Of course, some Disney Guests compared the procession of fire trucks down Main Street, U.S.A. to a parade, with Jason Hartless on TikTok posting a tongue-in-cheek reaction to Disney’s new “nighttime parade”:

And Katie Daniels further added a humorous note to the evening’s dramatic events with a joke on the return of Disney’s Main Street Electrical Parade:

Keep up to date with Inside the Magic for any new updates on the Walt Disney World fire and its cause.

Were you on Main Street, U.S.A. U.S.A. when the fire trucks arrived? Let us know in the comments.