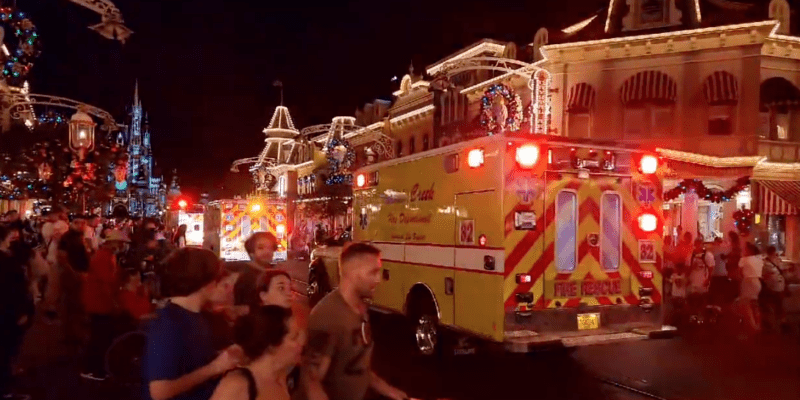 Late last night, Walt Disney World Guests took to social media to share various photos of videos of ambulances and fire trucks driving down Main Street, U.S.A. at Magic Kingdom. Disney did release a statement shortly after the videos and photos emerged, saying that a small fire broke out and it was put out with a fire extinguisher.

Now, more details are emerging, including a possible cause of the fire.

This is definitely something we have never seen in all our years of visiting The Magic Kingdom… @WDWNT @InsideTheMagic pic.twitter.com/vWR7Cdhzw5

According to Orlando Sentinel, a small fire broke out near Cinderella Castle, causing Guests to evacuate the area. Jon Shirey, president of the Reedy Creek Firefighters Association, confirmed that around 6:45 p.m., a call came into the fire department for an “electrical fire on a junction box outside the castle.”

Once the firefighters arrived, they said they saw a tree on fire next to Cinderella Castle, which quickly prompted the structure to be evacuated and blocked off to Guests.

Firefighters told him that it appears a firework may have been the cause of the fire, but wanted to make it clear that at this time, the cause is still pending investigation by the Fire Marshal.

The interesting thing is that the call came in at 6:45 p.m., but there were no fireworks scheduled in Magic Kingdom at that time. Therefore, it is still not confirmed how the junction box outside the castle caught fire.

Two ambulances and a firetruck at Magic Kingdom, parked and disembarked at the left side of the Hub. No word on what's happening of course, I left to area to try and give them space and be respectful. pic.twitter.com/jOnNEkWM0l

Shirley went on to explain that even though firefighters try to avoid driving through main areas of Disney’s theme parks as often as possible, sometimes the nature of an emergency may call for responders to do so. Last night, this was one of those incidents as firefighters needed to get to Cinderella Castle as quickly as possible, meaning they had to drive down Main Street, U.S.A. in Magic Kingdom.

Orlando Sentinel did report that an unidentified Disney spokesperson later explained that a Cast Member was transported from the Park for non-emergency treatment. Additionally, Shirey stated that fire personnel treated a security guard who inhaled dry chemicals from a fire extinguisher. No other injuries were reported.

Inside the Magic will continue to update you as we get more information.

Were you in Magic Kingdom last night? Did you see the fire trucks drive down Main Street, U.S.A.? Let us know in the comments below.

Comments Off on Developing: Possible Cause of Fire at Magic Kingdom Revealed