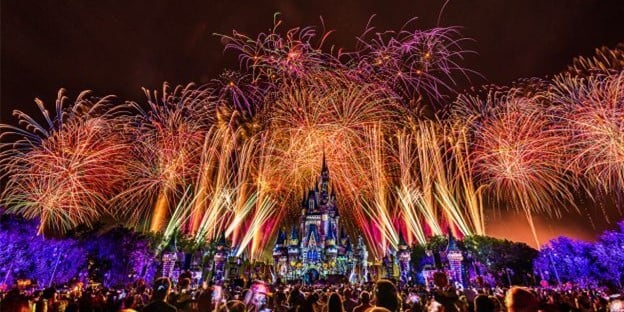 When Disney Wold puts out their evening firework show at Magic Kingdom, Guests are often left in complete and total awe of what they just saw. Disney World uses excessive amounts of fireworks each night for Disney Enchantment, and previously, Happily Ever After.

When Guests are watching the show from the from of Cinderella Castle in either the hub or Main Street, U.S.A., the fireworks look like they are all places perfectly, but the reality is that behind the castle, things are much more spaced out! If you have ever seen the show from the back of the castle (which I personally recommend you do), you know that fireworks are going off to the left and right of the castle, as well as much farther back. Because these fireworks are so close to Guests, however, Disney has had to take some precautions.

The Mouselets (@TheMouselets) took to TikTok to discuss how Disney prevents any fires from breaking out due to the fireworks and why they had to do this. According to the TikTok, a fire once broke out on Seven Dwarfs Mine Train due to the fireworks. After that, Disney started hosing down the roofs of the surrounding buildings as well as the floor at times to ensure that Guests were remaining safe from the pyrotechnics.

You can check out their full explanation below!

Having watched the fireworks from behind the castle many times, I can attest to the roofs being hosed down quite often. The ground, on the other hand, is not always wet. As we mentioned, watching behind the castle is a real treat as there tend to be very little crowds, and you will have 360-degree fireworks!

Another fun fact is that once Disney loads the fireworks in for the show, they must go off, no matter what. Even in the rain, Disney will eventually shoot the fireworks off once it is safe to do so, even with no one in the Park!

Have you ever seen Disney World fireworks from behind the castle?