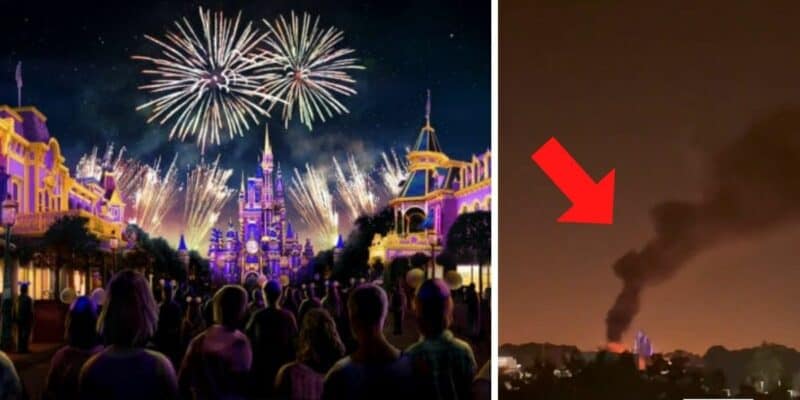 Disney has already confirmed that projection testing was underway during night hours. Still, of course, that is much more difficult to see than fireworks, which Disney must notify Guests in surrounding hotels such as Disney’s Contemporary Resort about.

It seems that during firework testing, things may have gotten a little too explosive as fire broke out.

YouTube channel Innovention Media posted a full video of the firework testing, and around the two-minute mark, we can see excessive black smoke rise from the firework launch site.

After the smoke begins to rise, we can see the testing slow down. We can see a red/orange color through the bushes at around four minutes as little fireworks erupt. By the end of the video, we can see a large trail of black smoke forming in the sky.

One Little Spark JL (@onelittlesparkjl) posted the firework testing on their Instagram story but then shared a photo of what the black smoke looked like.

As you can see in the photo above, the fire appears to have taken place somewhere behind Cinderella Castle. From Happily Ever After, we know there are firework launch points behind the castle. With Disney Enchantment being an even bigger nighttime spectacular, there is no surprise that they may have moved around or added more launches. Earlier this year, Disney also filed a permit for more firework launch points, which you can read about here.

Today, hours after the fire was spotted, it seems that it is business as usual at Magic Kingdom, so whatever caused the smoke yesterday evening did not cause extensive damage or affect normal theme park operations (all attractions, dining locations, and shops appear to be open as expected).

As we mentioned, the fire erupted during the firework testing last night, but it is unclear as to what the exact cause was. Reedy Creek, the fire department on Disney World property, does not usually release information on emergency responses. Some local Disney fans and Guests who were in the area watching the fireworks saw firetrucks heading in the direction of the fire.

At this time, Disney has not issued a statement regarding the fire and smoke that were seen following the firework testing last night. We are glad to hear of no injury reports and to know that whatever occurred was not a very serious incident since Magic Kingdom has no reported visible damage.

What do you think of the fire that broke out at Magic Kingdom? Let us know in the comments below.