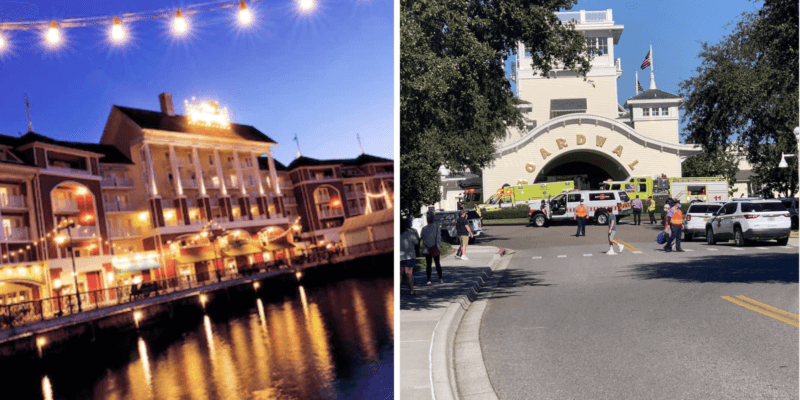 Guests at Disney’s BoardWalk Inn, unfortunately, experienced a small fire today, though no major damages or injuries have been reported at this time.

Twitter user and Walt Disney World Resort Guest Shane shared a photo of the emergency vehicles that responded to the scene. It appears that local EMTs (the Reedy Creek Fire Department) and the police were all on-hand to deal with the situation.

The exact cause of the fire at Disney’s BoardWalk Resort is not known at this time.

As of 10:54 a.m. EST, Shane noted that the “Fire alarm was pulled on the 3rd floor. Still outside waiting to go back in.”

He also shared multiple videos of the Disney Resort evacuation with Inside the Magic and provided us with more information regarding the incident.

The first video showcases Guests standing outdoors following the evacuation, while first responders presumably work to control the fire inside of the Resort. In this video, you can hear the fire alarm loudly blaring throughout BoardWalk Inn property. Finally, a third video gives us an idea of how the interior of the Disney World hotel looked near where the fire alarm was triggered.

As Shane’s personal account of the experience continued, he noted that the all-clear was given not long after the incident was first reported, and Guests have been allowed to return to their activities at BoardWalk Inn.

All clear now. Rooms on 1st, 2nd and 3rd patio doors open. Sheriffs all around. Fire extinguisher powder all over as we walked past

All clear now. Rooms on 1st, 2nd and 3rd patio doors open. Sheriffs all around. Fire extinguisher powder all over as we walked past

Experience the charm and whimsy of turn-of-the-century Atlantic City at this waterfront Resort hotel. Make a splash at Luna Park Pool and delight in a massage at the state-of-the-art fitness center. Discover carnival games, unique dining and exciting nightlife on the Coney Island-style boardwalk. Strung like saltwater taffy along the shimmering Crescent Lake, Disney’s Boardwalk Inn is located within walking distance to both Epcot and Disney’s Hollywood Studios.

Walt Disney World officials have yet to issue a statement regarding the Disney’s BoardWalk Inn fire. Stay tuned to Inside the Magic for all of the latest details regarding this situation. At this time, however, it seems that all Guests are safe and sound, which is the most important thing.
Have you experienced a hotel evacuation during a Disney World vacation?