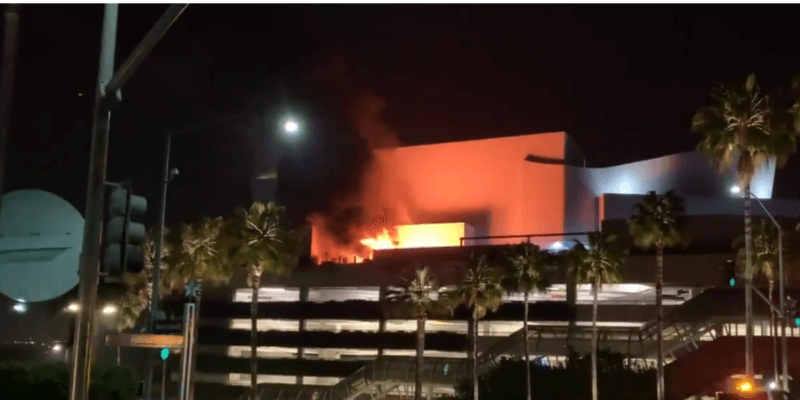 A fire broke out last night at Universal Studios Hollywood on the anniversary of the tragic 2008 fire that burned much of the historic film studio.

on June 1, 2008, Universal Studios Hollywood both the theme park and the backlot were affected by a fire that destroyed many structures and master recordings of many films.

Last night a fire broke out once again at Universal Studios Hollywood, but thankfully this was much less serious than the previous fire that happened on this date.

Universal fans took to Twitter late last night to show to fire burning on the top of the parking structure, which is home to the Despicable Me-themed Super Silly Fun Land area of the theme park. Here is one tweet from M Ryan Traylor who said:

Here is another look at the fire from Tom K Morris:

Happening right now according to Citizen app. Fire at Universal Studios Hollywood. Confined to parking structure but looks scary. Hope the Minion makes it through.

Happening right now according to Citizen app. Fire at Universal Studios Hollywood. Confined to parking structure but looks scary. Hope the Minion makes it through. pic.twitter.com/qtGLNBOvkw

Universal made a statement to local news Fox 26. They said:

We are looking into the cause of the fire, but I can tell you there was no damage and no rides or attractions were affected and will not impact park operations. There were also no injuries and the incident occurred back of house in a non-guest area. We will open, business as usual. The situation was swiftly managed.

Thanks to these photos from Bioreconstruct on Twitter you can see an overhead view of the Super Silly Fun Land.

Stay tuned to Inside the Magic for more updates on this situation.

What do you think about this fire at Universal Studios Hollywood?

Note: This article has been updated since it was originally published.