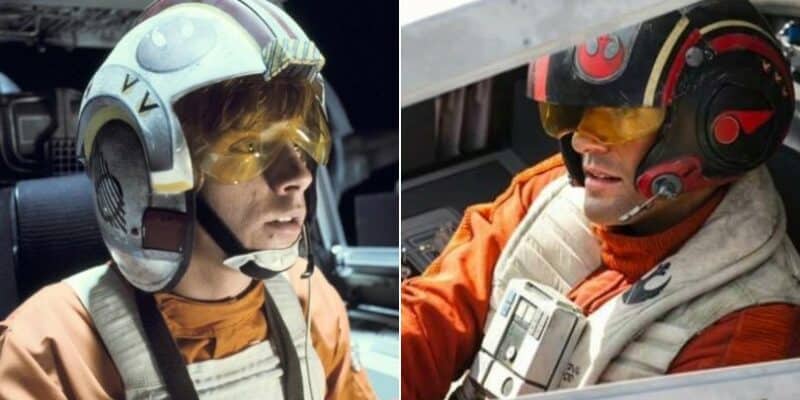 Despite the fact that the Star Wars sequel trilogy — Episode VII – The Force Awakens (2015), Episode VIII – The Last Jedi (2017), and Episode IX – The Rise of Skywalker (2019) — was more than a little bit divisive in the fan community, there was one character very few people disliked.

Poe Dameron (Oscar Isaac) was the “new” version of Harrison Ford’s Han Solo, with a devil-may-care attitude and a penchant for irritating Princess General Leia Organa (Carrie Fisher), even though she still had a soft spot for the young Resistance pilot.

Dameron’s fiery personality couldn’t be much further removed from that of Mark Hamill’s Jedi Master Luke Skywalker. Skywalker, measured and slightly sarcastic — much like Hamill himself, actually — doesn’t make brash decisions, and carries the weight of his past heavily (hence, you know, Ahch-To).

An icon for over 40 years, Skywalker doesn’t seem to be leaving the Star Wars franchise anytime soon after his reappearance in Jon Favreau and Dave Filoni’s The Mandalorian Season 2 finale episode — the legendary Jedi Knight became Grogu’s Master, spiriting him away from Din Djarin (Pedro Pascal) to complete his Jedi Order training, presumably at Skywalker’s Jedi Temple that eventually meets its demise at the hands of young Ben Solo.

Intriguingly, Star Wars just introduced a brand new character who is the perfect, unlikely combination of Dameron and Skywalker. Dean, a new character in the LEGO Star Wars Terrifying Tales Halloween special, a young mechanic who idolizes the ace pilot and is beyond thrilled to have the opportunity to help Dameron defeat Darth Vader’s servant, Vaneé.

Ultimately, Dameron realizes that Dean is Force-sensitive and takes him to meet sequel trilogy heroine, Rey.

Dean’s similarities to Dameron are obvious — his loyalty to the Republic and his courage in the face of danger — but, as one article about Dean pointed out, he also bears a surprising number of similarities to Star Wars’ original hero, Skywalker:

This “Everyman Hero” element of Star Wars was core to the first film – a farmboy on a remote desert world changed the fate of the galaxy – but became obscured as the Skywalker dynasty became more important. It would be great to see it restored among Rey’s recruits, given Rey is the nobody who became a Skywalker by choice.

At this time, Lucasfilm hasn’t confirmed any post-sequel trilogy projects, but it is highly unlikely that this era will go unexplored in the future. Although LEGO Star Wars projects are “canon adjacent”, there is certainly the potential for Dean to become Star Wars‘ newest Jedi character down the road.

What do you think? Will Dean become part of the live-action Star Wars canon?