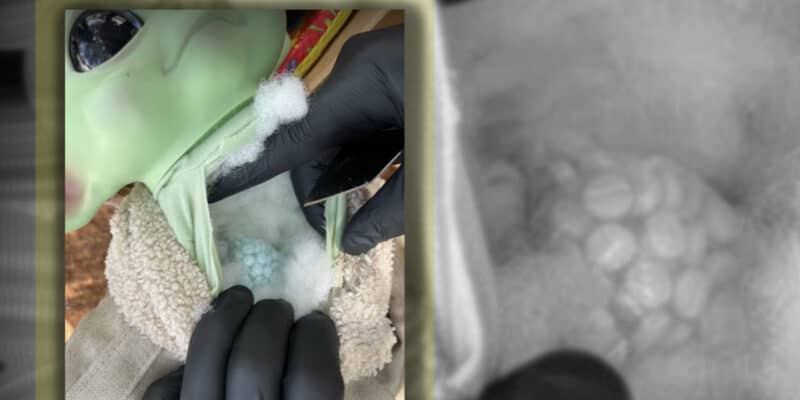 It’s indisputable that The Mandalorian is among the most popular television shows in the United States. When showrunner Jon Favreau and executive producer Dave Filoni introduced the world to Grogu (AKA “Baby Yoda”) and bounty hunter Din Djarin (Pedro Pascal), the face of the Star Wars franchise changed (literally) to that of a tiny green foundling who stole America’s heart.

Due to the overwhelming popularity of the Star Wars series, Mandalorian toys, such as Hasbro’s Galactic Snackin’ Grogu, tend to sell like wildfire — and now, one “Baby Yoda” toy has become part of a major criminal investigation.

The full report about the bizarre situation in Tennesse shared details about how Grogu was turned into a drug mule:

Fentanyl is known to be 80 to 100 times more potent than morphine. Being exposed to even one grain of it can be deadly.

Rutherford County Sheriff’s Captain Britt Reed said the Fentanyl found inside a Baby Yoda toy was intended to be sold in the county by a man from Michigan.

34-year-old Zave Garry, has now been charged with possession of 176 illegal Fentanyl pills that were made to resemble 30mg tablets of Roxicodone. Roxicodone is a brand name of oxycodone – an opioid pain medication.

What’s next for Grogu?

When we last saw Grogu, he was leaving with iconic Jedi Knight Luke Skywalker (CGI Mark Hamill) to complete his Jedi Order training.

Although we don’t yet know for certain where Grogu will appear next, in addition to The Mandalorian Season 3, there are two known Mandalorian spinoff shows — The Book of Boba Fett and Ahsoka — in the works — Gina Carano’s Rangers of the New Republic is not in “active development” — and a rumored Luke Skywalker series coming down the pipeline, there is plenty of room for all of the stories The Mandalorian saga needs to tell.

The Book of Boba Fett will air in December 2021 and Ahsoka is expected to air concurrently with The Mandalorian Season 3 sometime in 2022.

What do you think about this wild Star Wars toy drug bust?