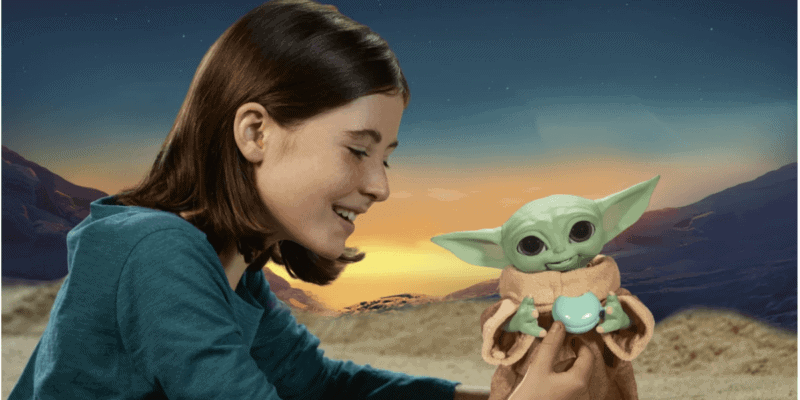 Inspired by Star Wars: The Mandalorian on Disney+, the newest kid on the block is a tiny green alien that loves to eat! shopDisney unveiled preorder opportunities for the new Galactic Snackin’ Grogu animatronic toy this week, and we’re completely enchanted! The kicker is that he won’t be shipping (via the Razor Crest, of course) until after Thanksgiving, so start shopping now for your Star Wars fan!

At a wee 9 1/4” tall, the Grogu toy is adorable! He comes with four accessories (tentacle soup, cookie, Mando’s shifter knob, and spoon), all of which will cause different interactions in the animatronic toy. Place any of the entertainment-inspired accessories into his hands and he’ll react with yummy or yucky eating sounds, blinking eyes, Furby-like ear motions, and more. There are over 40 sound effects and movement combinations to keep you and your family entertained with this little Baby Yoda!

Dressed in an extra soft plush premium robe, Galactic Snackin’ Grogu has a “galaxy of features,” including adorable sounds, fun animated motions, and interactive accessories. This animatronic toy is ready for action and adventure! If you pat his head three times, he will activate a two-handed Force animation where he will mimic channeling the Force, and you’ll almost hear his powers! This looks to be particularly present when he plays with the Bounty Hunter’s Razor Crest shifter knob.

When The Child (little Grogu) wants to be held, he’ll raise both hands, look up and coo cute sounds. You’ll want to carry him everywhere! This year’s cutest toy is available from shopDisney, the Galactic Snackin’ Grogu retails for $79.99, and is now available for preorder. He will not ship until December 1, 2021, so mark your holiday shopping lists now! Like most toys since the 1980s… batteries not included!

Will you be preordering this soon-to-be collectible Star Wars toy on shopDisney here? Leave us a comment below!