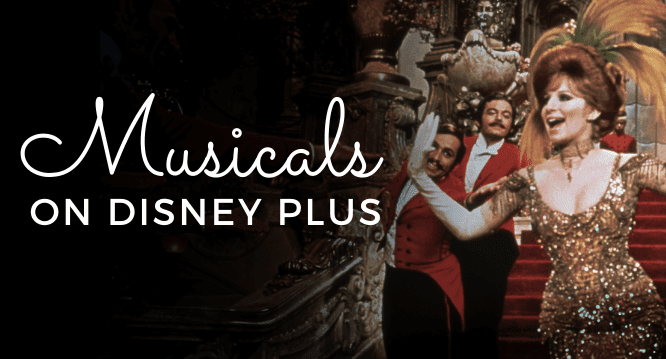 If you adored the summer debut of Hamilton on Disney+, we’ve got some great news for you. There is a slew of other musicals waiting for you!

But let’s break it down a bit. Disney is known for its animated storytelling, including a wealth of music, songs, and catchy lyrics. It could be argued that nearly the entire Disney catalog could be considered a musical, but instead, we’re going to focus on stage shows, operettas, musical theatre, and later, Disney movies that spawned Broadway productions!

Here are some must-watch musicals on Disney+. 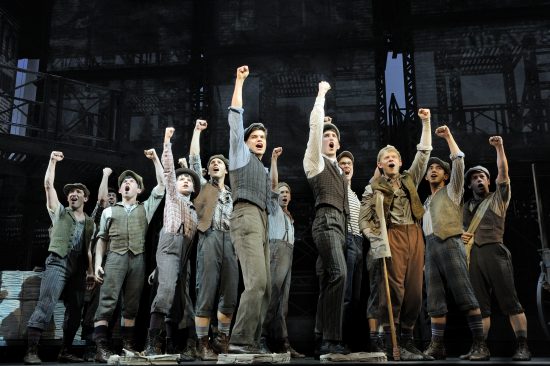 These stage productions are Tony award-winning musicals presenting on the Disney+ streaming service. Many, like the Hamilton Movie and Newsies, are actually a staged broadway musical, while others have been turned into a filmed version after the stage production debuted years before.

This classic actually debuted in the theatre four years before Julie Andrews joined the film as a cast member. This movie adaptation has taken the forefront of our movie-musical minds, and while it’s a 20th century Fox production, we’re glad it’s included with our Disney+ subscription.

A fantastic Broadway production in theatrical style, Newsies presents in a filmed adaptation that had many fans clamoring for this Disney classic. Skip the price of a Broadway ticket and tune in for some amazing music and dancing. Filmed live on stage at the Hollywood Pantages Theatre, it features members of the original cast on Broadway.

A 1999 revival of the broadway musical, this version first aired as an installment of ABC’s The Wonderful World of Disney. It stars Kathy Bates and Kristin Chenoweth for an updated version of the musical.

Inside the Magic reported that Aladdin, already having been filmed for a worldwide release, had a planned schedule for Disney+ when plans suddenly changed to debut Hamilton early instead. Sing along with the expanded catalog of songs!

Once Upon a Mattress

Another entry from ABC’s The Wonderful World of Disney is the 2005 version of Broadway’s Once Upon a Mattress. Based on Princess and the Pea, you’ll see Tracey Ullman stars as Winnifred, a princess from the wetlands who hopes to prove herself worthy of marrying sad but sweet Prince Dauntless. Carol Burnett, who originated the role of Winnifred on Broadway in 1959, costars as Queen Aggravain. – D23

Don’t forget this one, if you’re here just to research musicals on Disney+. So many people enjoyed #HamilFilm we had to collect the other Broadway toe-tappers out there!

One of our favorite renditions of the classic fairy tale, this groundbreaking 1997 made-for-television event finally has its due being on Disney+. “Brandy Norwood became the first African-American to play Cinderella. This version broke viewership records when it debuted, and it holds the record for the bestselling video for a made-for-TV movie.” – IMDB

Come alive and watch this newly added musical to Disney+. After the Fox Studios purchase, this showstopping family musical movie has a brilliant soundtrack and equally stunning visuals. You’ll be singing along in no time..

In the Oklahoma territory at the turn of the twentieth century, two young cowboys vie with an evil ranch hand and traveling peddler for the hearts of the women they love. The two-and-a-half-hour musical was made in 1956 and features a score by Rogers and Hammerstein.

Because so many Disney fans share the urge to consider these movie musicals in their own right, we’ll consider them an encore category. Each one of these Disney classics paved the way for a Broadway production in New York City and later touring productions across the globe, but continues to hold our imagination and songful hearts.

You can watch both the animated version and live/CGI version of this Disney classic. Emma Watson and Dan Stevens take on into the iconic roles of Belle and the Beast, this live-action adaptation of the 1991 film. The Stage show originally debuted in 1994 to theatre audiences and offered all eight songs from the movie as well as six new numbers.

Just a spoonful of sugar is what this Disney plus musical movie needed. The 1960s classic starring Julie Andrews was followed by a hit production in 2004.

A groundbreaking theatrical performance landed Julie Taymor on the map with her new form of puppetry. Both the animated and CGI performances of the theatrical releases can be viewed on Disney+, but we may have to wait longer to see the broadway version.

The Hunchback of Notre Dame

This gorgeous movie soundtrack was inspiration enough for the birth of a stage show, but sadly, the Broadway show never came to fruition. The musical The Hunchback of Notre Dame had its debut at La Jolla Playhouse in 2014, and again ran at the Paper Mill Playhouse in New Jersey until 2015, after which it was announced that the stage production would not move to Broadway. You can still enjoy the Disney classic movie while we mourn the loss of this production!

Taken to the stage in 2008, the 1989 movie musical sprouted a magical production where the original cast performed on roller skates in an effort to mimic the streamlined movement in the water. While it wasn’t long-lived, the original classic movie is once again the inspiration for another live-action/CGI Disney movie coming soon.

This Broadway show ended its run in 2020, due to the complications and costs of Broadway remaining closed. The theatre production pulled in three tony nominations, while the film became the first by Walt Disney Animation Studios to win the Academy Award for Best Animated Feature.

This lackluster stage production doesn’t really hold a candle to its movie musical twin. The stage show couldn’t use the pop songs so creatively twisted into the film because of copyrights, and the end result was a fall-flat production that quickly resorted to touring to save itself. Stick to this great streaming platform version of the original 1992 movie and sing along.

Which movie musicals on Disney+ are you planning to screen?  Leave us a comment below!