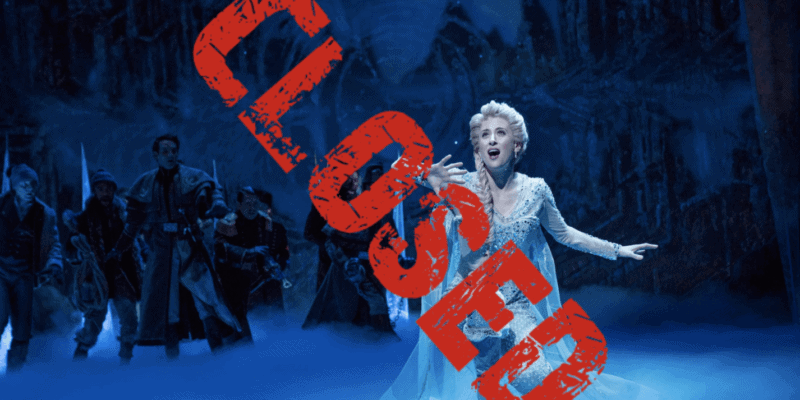 The Walt Disney Company has announced that it’s Broadway production of Frozen will not return to the legendary St. James Theatre once New York City musical theatre reopens to the public following the pandemic shutdown.

Disney currently has three theatrical productions running on Broadway: Frozen, Aladdin, and The Lion King. Even though Frozen was the newest of the three Disney theatrical performances, it was the weakest when it came to its success.

In a letter to Disney Theatrical Productions staff members, President Thomas Schumacher wrote, “This difficult decision was made for several reasons but primarily because we believe that three Disney productions will be one too many titles to run successfully in Broadway’s new landscape.”

When Frozen, which is estimated to have cost $25-30 million to produce, arrived on Broadway in 2018, it was expected to do well since it was adapted from the smash hit Frozen film franchise. Caissie Levy originally portrayed lead character Queen Elsa in the Broadway show before exiting in February 2020.

However, the stage version of Frozen was met with negative reviews from key critics and did not receive even a single Tony Award. By February 2020, it was averaging just $1 million in gross revenue per week, the lowest of the three Disney shows running at the time.

To put this in perspective, Disney’s The Lion King stage show has been on Broadway and touring for over 20 years and still regularly grosses over $1.4 million weekly, as per BroadwayWorld.com.

If you were hoping to see the Broadway Disney show Frozen but never got the chance, don’t give up hope just yet. Schumacher also announced that The Walt Disney Company still intends to maintain touring productions of The Lion King and Frozen in North America.

Stage versions of The Lion King and Mary Poppins will also continue to run in London’s West End theatre district.

Currently, the Broadway League has announced that all shows in Broadway theaters have been closed through at least Labor Day 2020. The team at Inside the Magic will continue to keep you posted regarding all Disney on Broadway news as it breaks.

What do you think about the Broadway Frozen shut down? Share your reaction to this permanent production closure in the comments.