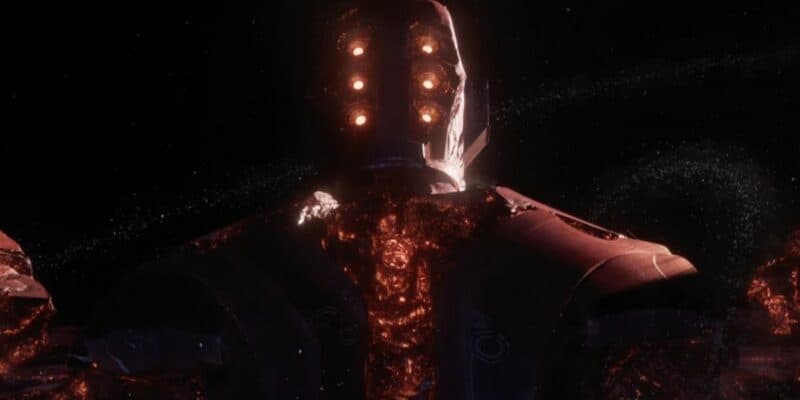 Marvel Studios is about to introduce a whole new team of cosmic-powered superheroes to the MCU when Eternals releases on November 5, 2021. The cast includes big Hollywood names like Angelina Jolie as Thena, Salma Hayek as Ajak, Richard Madden as Ikaris, and Kit Harrington as Dan Whitman AKA the Black Knight.

If you want to know about who the Eternals are in the MCU check out our guide for just that.

The Eternals were created by a race of cosmic god-like beings called the Celestials, who are set to play a big part in Marvel’s Eternals film. In true Marvel Comics fashion, their origins and powers are somewhat confusing, so please explore this deep dive that will answer all your questions about Marvel’s Celestials.

What was the first incarnation of the Celestials in Marvel media?

The Celestials made their Marvel Comics debut alongside the Eternals and the Deviants in Eternals #1 in 1976 by Jack Kirby. The original Eternals comic book run did not last long but the backstory for the Celestials has since been expanded upon.

Related: Dave Bautista Confirms End For ‘Guardians of the Galaxy’: “We’re Wrapping It Up”

Knowhere made its Marvel Cinematic Universe debut alongside the first shot of a Celestials in Guardians of the Galaxy (2014). The purple Celestial seen in the flashback wielding the Power Stone to destroy a whole planet is one of the most ruthless and destructive of the race, known as Eson the Searcher.

In Marvel Comics he is gold, not purple, and he destroyed Lemuria, the underwater home of the Deviants. He was also the one to give the name Apocalypse to the mutant En Sabah Nur. He was ultimately killed along with many of the Celestials in the battle against the Dark Celestials (Horde).

How did Marvel’s Celestials make the transition to television and movies?

The Celestials will finally be getting their due in Eternals. In the trailer, Marvel fans got their first look at what is most likely Arishem The Judge. Arishem is the red, six-eyed leader of the Celestials. He is also known as the Killer of Planets and started the war between the Celestials and the Watchers. Though the war is one-sided as Watchers like Uatu from Marvel’s What If…? vow never to interfere with life.

Concept art for Marvel’s Eternals also shows a whole team of Celestials. This includes Jemiah the Analyzer, Nezarr the Calculator, and Hargen the Measurer. The Celestials, other than Ego, are hard to tell apart as they loom over the Earth. Adding to some fans confusion there is also the famous Fantastic Four villain Galactus, who is also massive but is not a Celestial

What are the origins of Marvel’s Celestials? How does their origin play into the larger Marvel Cinematic Universe?

This has led to a recent fan theory that the Ten Rings of Power from Shang-Chi and the Legend of the Ten Rings (2021) might be connected to either the Celestials or the Eternals. In the comics, the Ten Rings come from an alien race called Makluan and came to Earth when the dragon/alien Fin Fang Foom crash-landed. But this appears to have been retconned in the MCU and all that was revealed about their origin is that they are thousands of years old. Thus, they could have arrived on Earth with the Eternals.

Marvel characters who are Celestials

Guardians of the Galaxy Vol 2 (2017) gave Marvel fans their best look at a celestial with Ego the Living Planet (Kurt Russel). Ego is Peter Quill’s AKA Star-Lord (Chris Pratt) father, and he is distinctly different from the gargantuan Celestials we have seen. Ego is sentient planet rather than a titan like other Celestials seen in the Marvel Cinematic Universe.

Related: Marvel Studios Has a Christmas Surprise for Fans

What duty have the Celestials been charged with? 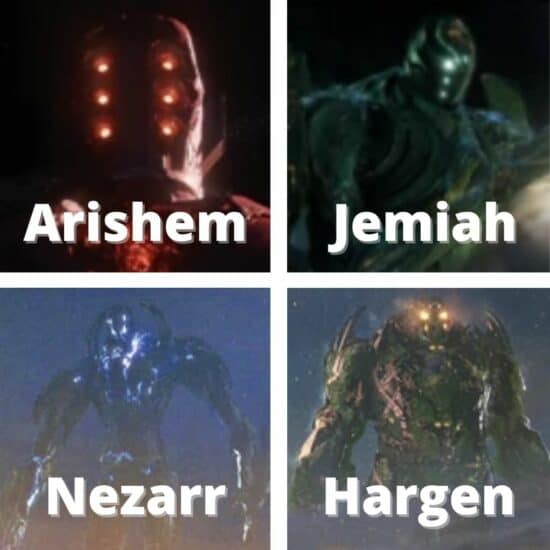 The Celestials are Cosmic Entities who were originally created as servants of the First Firmament as the first form of life in the universe. However, they broke off and took up the task of creating life throughout the Marvel Universe. The Fulcrum, also known as The One Above All, uses them to create a balance of life and death in the universe.

Celestials develop life on a planet through four visitations of a planet called “hosts.” The First Host plants the seed of life, the next two study the planet to track its progress and during the Fourth Host, a planet is judged to see if it is successful.

Related: How to Get a Ton of New Marvel Stories For FREE

In 2013’s Marvel NOW! event during the “Secret Origin of Tony Stark” story arc in Iron Man Vol 5 by Kieron Gillen and Matteo Scalera, they revealed the Godkiller Armor. The Godkiller Armor was created by the Aspirants to battle the rebel Celestials when they were evenly matched.

However, the Aspirants started to argue among themselves and stripped the Godkiller Armor for parts, which allowed the Celestials to prevail. Their victory shattered the First Firmament, whose fragments would become the Infinity Stones.

The Dark Celestials storyline introduced a whole new breed of the Celestials to Marvel Comics. These celestials were infected by the Horde – a species of bugs that work for the Fulcrum. The Horde balance out the life-creating force of the Celestials so that everything exists in a state of equilibrium.

What should you know about the Celestials as a group?

The Celestials’ ultimate goal is to create life. Through their experiments, they create the Eternals, the Deviants, and even the mutants. Indirectly they are even responsible for the fall of Atlantis, home of Namor the Submariner, as it was conquered by the Deviants.

The Celestials are very mysterious. They wear armor and it is rare to see their true forms. Tiamut the Dreaming Celestial was once seen with a fiery humanoid head when it removed his helmet for a moment. Like the Eternals that they created, they do not age, but they can be killed.

They were killed by the Godkiller Armor but during Dark Celestials, Knull was able to resurrect the dead Celestials to attack the Avengers. It is believed that they get their powers from a pocket universe that they created. They draw their immense cosmic energy from these extradimensional spaces.

How the Celestials are connected to the Eternals

When the Celestials first came to Earth, they found proto humanity just coming into being. They began conducting experiments on life on prehistoric earth. This originally created three genetic-offshoot races: Humans, Deviants, and Eternals.

What is the difference between Marvel’s Celestials and Eternals?

However, one power that the Eternals have the Celestials do not is resurrection. When a Celestial dies, they tend to stay dead. The exception being those who reanimated during Dark Celestials. When Knull decapitated a Celestial, its head became Knowhere the base of the Guardians of the Galaxy. Marvel fans should not expect Ego to return anytime soon.

In contrast, the Eternals have the Great Machine, also known as the Archive. This artificial intelligence is made of some smaller machines which include the Machines of Resurrection, which can bring any Eternal back to life at the cost of killing one human being.

How do the Celestials and the Eternals intertwine and diverge?

After the Celestials finished their experiments on Earth, they left the Eternals behind. From there, the Eternals lived away from humanity for some time. Some would eventually break off like Gilgamesh, who was banished and became The Forgotten One. In the upcoming Marvel movie, Gemma Chan’s Sersi has clearly been living with humans for some time and formed a relationship with Dan Whitman (Kit Harrington).

The Eternals only came out from their hidden mountain top city Olympia during the Second and Third Hosts, the tests issues by the Celestials to determine if their experiments on humanity were a success. In the movie, they appear to have gone their separate way are reuniting as the Celestials return for the Fourth Host.

Characteristics of the Celestials

The Celestials are typically Humanoid in their physical appearance – as long as you don’t count the Living Planet, Ego. They are gargantuan, with some standing at over 2,000 feet (610 meters). Exitar the Executioner is one of the tallest at nearly 20,000 feet (6096 meters).

For reference, the tallest building on Earth is Burj Khalifa in Dubai is 160 stories and is 2,717 feet (828 meters). And The Fantastic Four villain Galactus, with whom some fans confused with a Celestial, is a mere 28 feet (8.5 meters) in comparison.

What are the physical characteristics of the Celestials?

The Celestials do not technically have genders, but most are depicted as male. Not much is known of their biology, but their bodies are made of black bio-mechanical matter that can absorb souls. It is rare for them to be seen outside of their armor and some have theorized that the armor channels their energy from a place where they exist outside of reality.

While the First Firmament created the first Celestials, and they cannot directly reproduce. They impregnate planets with eggs, though it does not usually work out for the host planet. The planet is injected with Vibranium to serve as the shell and the hatching destroys the world.

The Celestial Madonna was also shown as “pregnant” in SHIELD #1 by Jonathan Hickman and Dustin Weaver. She called her child “something new/unique/forbidden.” She died giving birth inside Earth’s Sun to a variant Celestial called Star Child.

What are the main personality traits of the Celestials?

The Celestials do not have personalities so much as tasks they perform. For example, Arishem is the Judge and he alone decided whether Exitar will destroy all life on a planet. They have a looming presence over the other Marvel characters but do not develop interpersonal relationships.

The Celestials are war-like. They had their own civil war at the start of the universe and went on to declare war on the Watchers. They do not concern themselves with the affairs of lower beings unless they interfere with their experiments. Though the trailer does show them conversing with the Eternals.

What powers do the Celestials have?

The Celestials are essentially immortal. While they can be killed it is tremendously hard to do so. They have internal defenses inside their armors. These include jellyfish-like antibodies and winged and tentacled creatures which swarm in great numbers and can fire powerful blasts from their one eye.

They are linked to each other through quantum telepathy, can communicate through time and space, and are essentially all-knowing and all-powerful. Obviously, they can destroy whole planets. They are some of the most powerful beings in the Marvel universe and their entrance into the MCU will bring the movies to a whole new level.

Related: Marvel Proves the Wasp Is Better Than Ant-Man in Every Way

The Celestials are coming soon to the Marvel Cinematic Universe. When they debut in Eternals, Marvel fans will learn many new things about them. Marvel Studios already have changed their lore on the big screen by making Ego a Celestial so we will just have to wait and see if more revelations are in the works.

Let us know in the comments if you have any questions about Marvel’s most powerful beings — the Celestials.