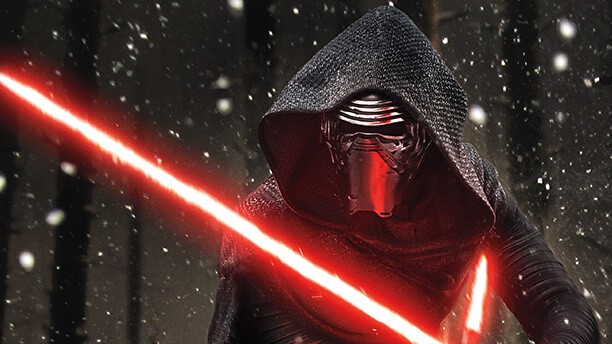 Ex-United States Marine and current Hollywood actor Adam Driver gained fame in the Star Wars fan community when he made his debut as the villainous Kylo Ren in Star Wars: Episode VII – The Force Awakens (2015).

Ren — formerly known as Ben Solo, the son of Princess Leia Organa (Carrie Fisher) and Millennium Falcon pilot Han Solo (Harrison Ford) — wreaks havoc throughout the sequel trilogy, doing everything in his power to convince Rey (Daisy Ridley) to turn to her darkest desires, away from the light side of the Force.

Ren even brings Rey to Supreme Leader Snoke (Andy Serkis) in his throne room, prior to killing the humanoid to assume the title of Supreme Leader himself.

In the end, though, Ren completes a classic redemption arc in Star Wars: Episode IX – The Rise of Skywalker (2019), ultimately becoming Ben Solo once again and saving Rey’s life on Exegol when her grandfather — Rey’s father was a failed Palpatine clone who was not Force-sensitive — Emperor Palpatine (Ian McDiarmid) and his clone cultists attempt to drain her life force.

Despite his redemption, much like his grandfather Sith Lord Darth Vader, Driver’s character remains, for many fans, most popular as a villain.

Now, the actor is returning as a brand new villain under the Walt Disney Company banner. Driver will be playing antagonist Jacque Le Gris, an alleged rapist, in 20th Century Studios’ –formerly 20th Century Fox — upcoming The Last Duel, which is set to release on October 15, 2021.

The role should give Driver a chance to really show his acting chops, as it is different from anything he’s ever done in the past.

More on The Last Duel

The film, which is based on a true historical story about the last duel in France, is officially described as:

The Last Duel is a gripping tale of betrayal and vengeance set against the brutality of 14th century France, directed by visionary filmmaker and four-time Academy Award® nominee Ridley Scott. In theaters nationwide October 15, 2021.

Rotten Tomatoes offers the following synopsis of The Last Duel:

The Last Duel is a cinematic and thought-provoking drama set in the midst of the Hundred Years War that explores the ubiquitous power of men, the frailty of justice and the strength and courage of one woman willing to stand alone in the service of truth. Based on actual events, the film unravels long-held assumptions about France’s last sanctioned duel between Jean de Carrouges [Matt Damon] and Jacques Le Gris, two friends turned bitter rivals. Carrouges is a respected knight known for his bravery and skill on the battlefield. Le Gris is a Norman squire whose intelligence and eloquence make him one of the most admired nobles in court. When Carrouges’ wife, Marguerite [Jodie Comer], is viciously assaulted by Le Gris, a charge he denies, she refuses to stay silent, stepping forward to accuse her attacker, an act of bravery and defiance that puts her life in jeopardy. The ensuing trial by combat, a grueling duel to the death, places the fate of all three in God’s hands.

You can view the full trailer for The Last Duel below:

Are you looking forward to seeing Adam Driver in his first Disney project since the Skywalker Saga ended?