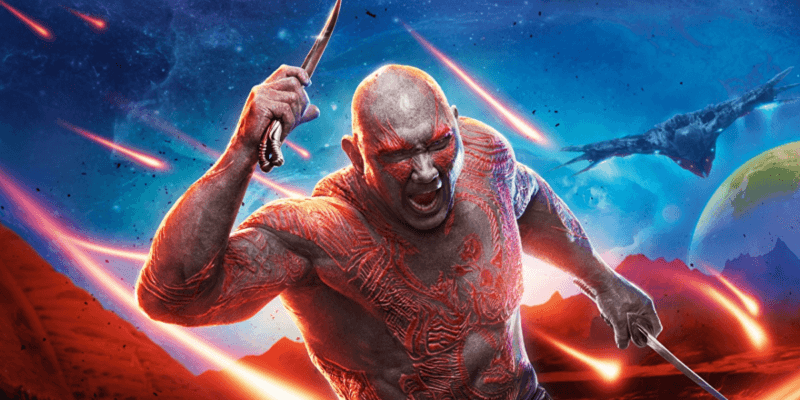 Director James Gunn, the principal creative force behind Marvel’s Guardians of the Galaxy franchise, believes the Marvel Cinematic Universe will eventually launch an R-rated film. Following the success of of James Gunn’s R-Rated entry in the DC Universe, The Suicide Squad (2021) — starring Idris Elba and Margot Robbie — can audiences expect James Gunn to change his approach to the MCU moving forward?

While Marvel fans shouldn’t expect a more mature rating for the upcoming Guardians of the Galaxy Vol. 3 (2023), Gunn shared his enthusiasm for an R-rated Drax the Destroyer MCU film in a new interview.

After Gunn briefly parted ways with Disney and Marvel Studios over his resurfaced offensive Tweets, Warner Bros. was quick to snap up the services of James Gunn as the helmer of The Suicide Squad (2021), due out August 6. Gunn’s temporary departure from the Guardians of the Galaxy franchise led to two DCEU projects: The Suicide Squad film and the HBOMax spinoff series, Peacemaker starring John Cena. Both are confirmed to have hard R ratings reflective of content intended for mature audiences.

Marvel boss Kevin Feige has indicated that Marvel Studios is developing Deadpool 3 alongside producer/star Ryan Reynolds as the first ever R-rated film in the Marvel Cinematic Universe. With James Gunn known for his often raunchy, off-beat sensibilities, is it possible that the director would pursue a rated R project within the MCU?

In a new interview with IndieWire promoting The Suicide Squad (2021) — starring Idris Elba and Margot Robbie — Gunn was asked what possibilities existed for R-rated films in the Marvel Cinematic Universe. Gunn expressed near certainty that Marvel Studios would pursue material with R ratings, though he was quick to point out that Guardians of the Galaxy Vol. 3 (2023) was not a candidate for more mature themes.

“I think they [Marvel Studios] will, I think they will… I’m almost sure they will. Not ‘Guardians’ though, because ‘Guardians’ are family movies, so it’s different. People are like, ‘Finally they let you do R rating! What would ‘Guardians’ be like if that was R-rated? I’m like, ‘But it’s not.'”

Gunn went on to say that he thinks of the Guardians of the Galaxy films more as “fables,” as opposed to the more hardcore vibe of his Suicide Squad projects, saying,

“… ‘Guardians’ movies are fables, and I don’t think of them like that. I don’t write them like that. It’s a different type of movie, and you can have some gore and some scary darkness in there and things like that, which is good, but it’s not the rock and roll of ‘Suicide Squad.'”

James Gunn went on to comment, if only briefly, on the possibility of a Guardians character going solo for a R-rated movie: the super literal, Thanos hating behemoth played by Dave Bautista, Drax the Destroyer. As he explained his approach to Guardians of the Galaxy as family fare, he pointed out that he’d “love” to do a Drax solo project that focused on the more barbaric qualities of the brutal grey Guardian, explaining,

“I could go off and make a Drax movie that’s R-rated. That I would love to do, like barbarian Drax.”

The director’s comment is intriguing not only for the exciting possibility it teases, but also because Drax actor Dave Bautista has been quite vocal in his assertion that Guardians of the Galaxy Vol. 3 will be his last appearance as Drax the Destroyer in the Marvel Cinematic Universe.

Bautista has said that he feels Marvel Studios should’ve made a solo film that focused on the Drax’s backstory, rather than making Drax more of what the actor considers to be more of a punchline in the Guardians films. However, with Bautista’s days as Drax apparently numbered, Marvel may have missed the boat on making a Drax film with him as the star.

Bautista explained his thoughts on the subject to Collider, saying,

“…you look at [Drax] and he looks terrifying, but Drax gets his a** kicked more than any other Marvel character… The whole “Destroyer” thing they just threw that out the window…people just fell so in love with the comedic side of Drax they tapped into that, then they tapped into it more, then they really dug a hole into it. But we missed a huge boat on that character and I don’t think it’ll ever come back around. But I’m really just looking forward to finishing out this whole journey.”

Marvel Studios president Kevin Feige has said that Deadpool 3 is effectively the only rated R project in development for the MCU.

Speaking to Deadline on the possibility like other Marvel properties with darker, more mature elements — like Punisher, Blade, or Ghost Rider — would be in consideration for an R rating, Feige felt no need to stray from the formula that has brought the studio success, stating,

“I think we target everything we’re doing for kids and adults, so I think your question is more adult or R-rated. Other than Deadpool, which has already established itself as a certain genre and a certain rating, that we already said we would not mess with when we started working on Deadpool — which we have — other than that, we haven’t encountered a story or a storyline or a character’s journey that a PG-13, or the tone, or the ratings we’ve been using up to this point has prevented us.”

Marvel fans meet Drax (Dave Bautista) in the MCU as the completely literal — and lethal — member of the Guardians of the Galaxy seeking revenge on Ronan the Accuser (Lee Pace) and Thanos (Josh Brolin). Drax is a member of a fierce warrior race hailing from a primitive planet. Drax hates Thanos and Ronan the Accuser for a good reason. Ronan — working on orders from Thanos — was responsible for destroying half the population of Drax’s home planet, including his entire family. While audiences have seen Drax’s pursuit of revenge on Thanos throughout the Infinity Saga, the limited bits of information exposed in the Marvel Cinematic Universe about Drax’s backstory hint at violent story that could lend itself well to an R-rated movie. Also, the comedic ability of Bautista as he embodies the metaphor-adverse Drax could be really fun in a Deadpool-style raunchy comedy.

The Suicide Squad (2021) is already off and running to a great start at the box office. Thursday night previews ahead of the film’s official August 6 release have posted a pandemic record for an R-rated film, earning $4.1 million. There haven’t been many new R-rated films released during the pandemic, a few notable comparison’s include Universal’s Forever Purge (2021) and Funimation’s Demonslayer (2021) which tallied $3.8 million and $1.4 million for their opening Thursday previews respectively. David Ayer’s DCEU Suicide Squad spinoff, the PG-13 Birds of Prey starring Margot Robbie as DC fan favorite Harley Quinn posted $4 million on its Thursday bow just before the pandemic in February 2020.

The Suicide Squad tells the story of a covertly assembled team of super villains who are given the opportunity to earn their freedom from captivity by using their powers to complete a dangerous mission. The Suicide Squad boasts an impressive ensemble cast that includes Margot Robbie as Harley Quinn, Idris Elba as Bloodsport, Viola Davis as Amanda Waller, Joel Kinnaman as Rick Flag, Jai Courtney as Captain Boomerang, David Dastmalchian as Polka-Dot Man, Sylvester Stallone as King Shark, Michael Rooker as Savant, Nathan Fillion as T.D.K, Pete Davidson as Blackguard, Seann Gunn as Calendar Man, and John Cena as Peacemaker who will star in a spinoff series on HBOMax, also directed by James Gunn.

Would you like to see an R-rated Drax solo movie in the MCU? Let us know in the comments!

Comments Off on Will James Gunn Bring R-Rated “Barbarian” Drax to the MCU?