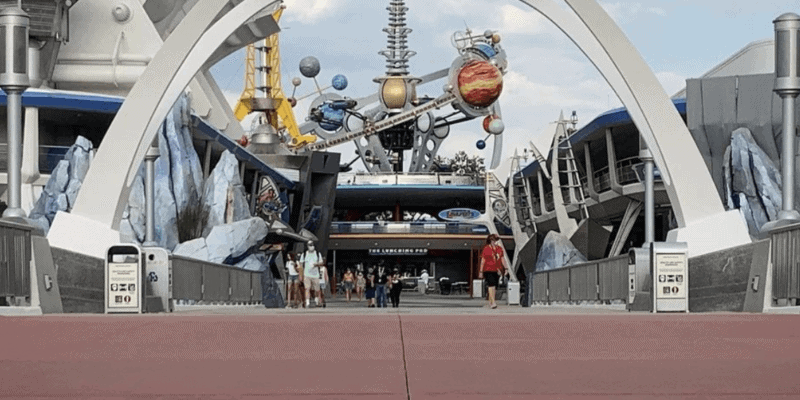 When the Happily Ever After fireworks show returned to Magic Kingdom Park the first week of July, for example, a massive crowd of Guests gathered on Main Street, U.S.A. to watch Cinderella Castle light up for the first time in well over a year.

This weekend, though, it appears that holiday crowds have dissipated and Guests visiting Disney World’s castle theme park may be able to expect much lower crowds.

As you can see, the overall crowd levels at Disney World were below average, ranked 4 out of 10. Magic Kingdom was the most crowded Park on property, but was still ranked 5 out of 10 — this, presumably, means the theme park was much less busy than it has recently been, particularly over the Fourth of July weekend.

It appears that the low crowd levels are continuing into the weekend, with sparse crowds in Magic Kingdom’s Tomorrowland area this morning.

Travis shared a photo of a shockingly empty Magic Kingdom pathway and wrote:

A “nearly empty,” and I can assure you, VERY HOT #Tomorrowland… Tge [sic: The] weekend’s upon us folks…

A post shared by Sharing the Magic of Orlando (@passholder_trav)

Earlier this year on The Walt Disney Company’s Q2 earnings call, Disney CEO Bob Chapek confirmed that the theme parks have already started increasing capacity once again amid changes to the CDC’s COVID-19 guidelines. At this time, we do not know exactly what percentage of maximum capacity Walt Disney World is operating at, but we know it is higher than 35%.

It is worth noting that crowd levels could certainly increase throughout the day at Magic Kingdom and Disney World’s other theme parks, but for now, it appears that Guests who are headed to the Most Magical Place on Earth are in for an enjoyable experience with relatively low crowds.

Are you visiting Walt Disney World Resort this weekend?

Let the expert team at Academy Travel help you plan your next magical Disney vacation at no extra charge!