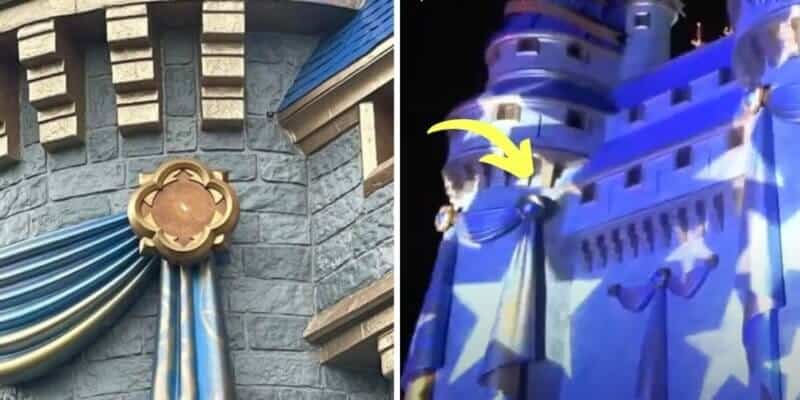 Credit: Inside the Magic (left) Spokesmayne via YouTube (right)

As we approach October 1, Guests who visit Disney World may start to see more and more additions to the parks as they prep for the 50th anniversary celebrations!

Magic Kingdom has garnered the most noticeable change so far, with Cinderella Castle receiving its makeover in real-time in front of Guests. We have slowly started to see all the ribbons, jewels, and swirls be added to the castle over the past couple of months. Guests can now see a regal blue, royal pink, and shimmering gold palette glitter across the castle when they walk in the park!

During a recent visit, we noticed that one of the jewels on Cinderella Castle had come off, and all that was left was a mark that looked to be an adhesive that once held up the blue jewel. Considering Disney had confirmed all the decor was hurricane-proof it was interesting to see the jewel fall off without any storm as the cause.

We took a few trips to Magic Kingdom after noticing the jewel fell but continued to see the jewel missing the following week. Although the jewel was missing for a while, Disney did pop it back into place on the castle for the Fourth of July weekend. During a live stream yesterday by YouTuber Spokesmayne we were able to see that the jewel is now back in its rightful place on the castle.

For now, we will have to wait and see what more decor or projection detailing Disney adds to Cinderella Castle! With Disney’s Enchantment also coming to Magic Kingdom on October 1, the castle is sure to look even more stunning than it already does for the big 50.

Stay tuned to Inside the Magic for all of the 50th anniversary celebration updates.

How do you like the decor on Cinderella Castle so far? Let us know in the comments below!