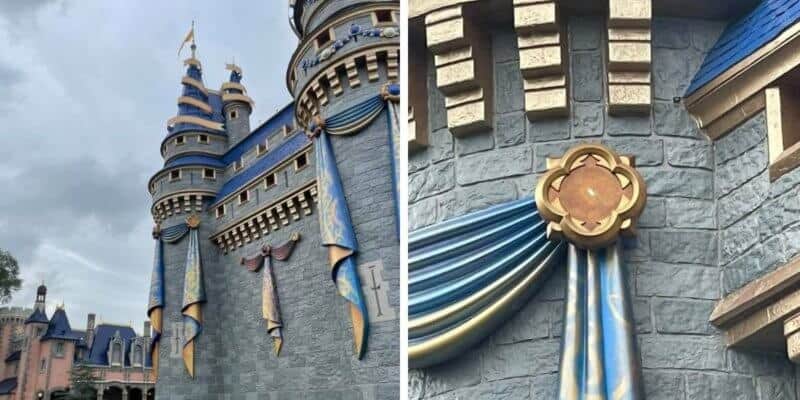 Now that we are months away from the 50th anniversary celebration at Walt Disney World, preparations are underway!

Magic Kingdom is transforming before our eyes as Cinderella Castle has been undergoing a makeover adding a regal EARidescent look. Considering the celebration will last 18 months, Disney has had to ensure that their additions to the castle are hurricane-proof, as many storms are known to hit the Orlando area during the summer months and beyond in Florida.

Even though the castle has been deemed hurricane-proof, it seems that some aspects of the decor may not be as sturdy as they once thought. On a visit to Magic Kingdom, we noticed that one of the diamond jewels had fallen from the drapery. Below, you can see a photo of what the jewel typically looks like when securely fastened to the castle.

Below is a photo of the missing jewel. As you can see, there is a small white spot in the center, which likely acted as the adhesive to keep the jewel in place.

When the jewel fell, it landed in the grass directly beneath the drapery. Disney has seemingly already collected the jewel, as it was no longer on the floor but clearly still missing from the castle.

Considering we have not experienced any major storms in Orlando yet, we hope that the rest of the decor on Cinderella Castle can withstand any weather that comes its way!

The 50th anniversary celebration will commence on October 1, and every Walt Disney World Park will be celebrating! EPCOT is adding points of light all over Spaceship Earth in a permanent transformation that will let the ball shine, the Tree of Life at Disney’s Animal Kingdom will have projections shone on it, and Tower of Terror will gain a little glitz and glamour at Disney’s Hollywood Studios.

Do you think that the decorations on Cinderella Castle will be able to make it through hurricane season in Florida?

If you want to celebrate the 50th at Magic Kingdom, EPCOT, Disney’s Animal Kingdom, or Disney’s Hollywood Studios with Mickey Mouse and Minnie Mouse, you need to book your vacation today! Click here to get started.