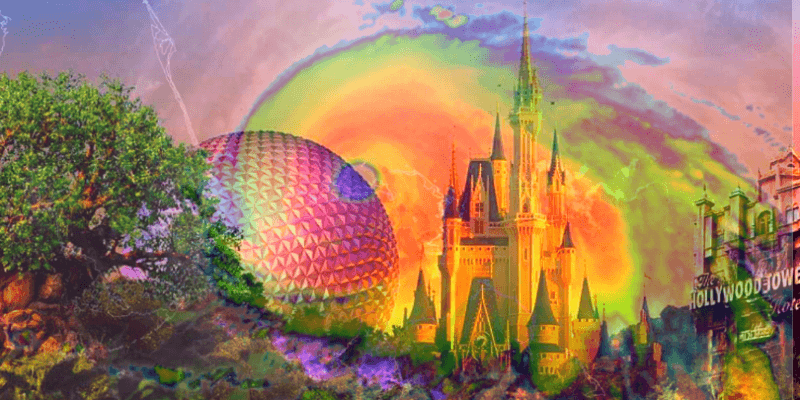 We know that Walt Disney World Resort hotels offer some of the best safety and security during hurricanes. And if you know you’ll be stuck in Florida during Hurricane Dorian, the Disney hotels are some of the best places to seek refuge as you wait out the storm. But many fans wonder how the prominent theme park structures — like Cinderella Castle, Spaceship Earth, the Tree of Life, and the Tower of Terror — withstand such intense storm conditions.

With some of the most rigorous and thoughtful building and safety guidelines used anywhere in the world. Walt Disney World Resort is one of the safest places in the entire state of Florida during a hurricane, tropical storm, or any other catastrophic event. Here’s why none of the Disney theme park structures will become damaged during Hurricane Dorian or any other storm heading Disney’s way.

Does Disney remove the spires of Cinderella Castle at Magic Kingdom?

No! This is perhaps one of the most persistent rumors that circulates with nearly every major hurricane that comes Disney World’s way. Cinderella Castle is made of mostly gypsum, plaster, and fiberglass, and its materials and design allow it to withstand hurricanes. The castle is perhaps the most prominent icon in all of Walt Disney World, so it would have to be strong enough to handle the intense weather conditions that central Florida frequently experiences. Plus, because of the castle’s design, the spires are not easily removable, although they and the rest of the castle’s structure are regularly updated. The rumor of Disney removing the Cinderella Castle spires during a hurricane dates back decades, and while we don’t expect it to end anytime soon, we’re happy to put it to rest as best as we can.

Is Spaceship Earth in danger of hurricane damage?

Just as with Cinderella Castle, many fans wonder if massive structures like Spaceship Earth are also in danger of hurricane damage. Often people will joke that the attraction will roll away if there’s too much wind or intense conditions because of a hurricane. As Orlando Weekly points out, Spaceship Earth is a building, not a ball that can simply roll away the moment Disney World is faced with a hurricane.

The entire Walt Disney World Resort follows EPCOT building codes. These guidelines date back to the early days of Disney World when Epcot was first envisioned as a city of the future. These are some of the most intense rules, and for good reason–Disney World is such a popular tourist destination that is open 365 days a year. So why would Disney want any part of the resort to be easily damaged in a storm?

The Tree of Life (the main icon of Disney’s Animal Kingdom that is built to resemble a real tree) can handle hurricanes, and so can the Tower of Terror at Disney’s Hollywood Studios and every other attraction across Disney property.

In addition to its structures being able to withstand hurricanes, Disney World also handles many of its own public works. This includes Disney’s own power production via Reedy Creek Energy Services, a biogas-fueled facility operated through a partnership with Harvest Power, and hundreds of acres of solar energy. Walt Disney World Resort is able to operate like its own city, and given that it’s around 50 square miles of magic with countless guests traveling there year after year (even during hurricanes) it makes sense why it would want to.

Even though there aren’t any hurricane structures on Walt Disney World Resort property, Disney is so safe that they aren’t necessary. With the strict building codes that all of the structures (including the resort hotels) abide by, you won’t have to question your personal safety while staying on Disney property. Of course, Disney World isn’t responsible for your vehicle or personal property while you’re on vacation, but you can rest assured that you and your loved ones will be safe.

As always, Disney’s top priority is safety, something you never have to worry if you’re at Walt Disney World, even during a hurricane.

Have you ever stayed at Walt Disney World during a hurricane or tropical storm?