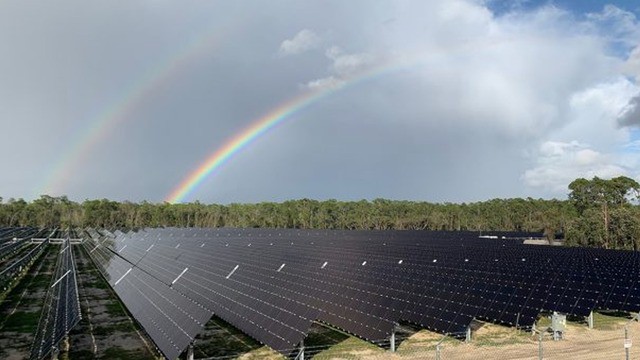 It may be easy being green! Disney has recently been making some pretty environmentally conscious changes (remember the company’s vow to ban plastic straws?). In the latest news, they have turned on a new 270-acre solar facility in Orlando that will power two of the four Walt Disney World theme parks.

Disney announced last week that the new facility, which is 50 megawatts and almost 300 acres large, officially began running and providing solar power to the Walt Disney World Resort this month. The facility, which was built in collaboration with Origis Energy USA and the Reedy Creek Improvement District, will generate enough renewable clean energy to power two Walt Disney World theme parks every year. Disney shared that this facility is one of the many efforts Disney is making to become more environmentally conscious and sustainable. It plays an integral role in The Walt Disney Company’s goal of reducing greenhouse gas emissions by 50% by the year 2020, which they committed to in 2012.

We shared the news of Disney’s newest 500,000-panel solar facility when construction began last year. The facility is located across from Disney’s Magnolia Golf Course and near the Seven Seas Lagoon. This facility is also leaps and bounds larger than Disney’s other solar facility near Walt Disney World, which is a mere 48,000 panels, Mickey-shaped, and located near Epcot.

Take a look at Disney’s announcement video about the facility below:

We love hearing about The Walt Disney Company’s conservation efforts, and we hope that this won’t be the last solar facility or other renewable energy facility that Disney constructs. Who knows, if this facility is any indication of Disney’s commitments to the environment, we won’t be surprised if all of Walt Disney World Resort is powered by renewable energy in the future. How awesome would it be if the Disney Parks were all solar powered? We can’t wait to see what’s in store.

What do you think of The Walt Disney Company’s commitment to environmental conservation? Share your thoughts with us!