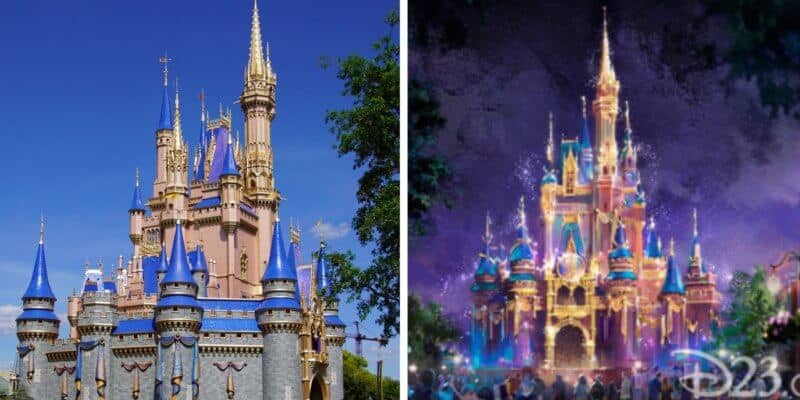 Now that the 50th anniversary celebrations are fast approaching at the Walt Disney World Resort, many of us Disney fans are looking to see what changes will be coming our way on October 1, 2021.

One of the new looks that are coming to Disney World, of course, is the Cinderella Castle decor which we are slowly starting to see come to life with its EARidescent blue, pink, and gold color scheme coming to life. It seems as though every day, we see a new decal added to the facade of Cinderella Castle, even though we are still months away from the 50th anniversary celebration at the Disney park.

Although we have seen concept art for how the castle will look, and we know that all of the changes cannot happen overnight, the element of surprise has slightly been removed as it seems that over the next few months, Disney fans will have the opportunity to watch the Cinderella Castle slowly be transformed into a 50th celebration centerpiece at Magic Kingdom.

This could be looked at as a positive as well as a slightly negative note, depending on where you stand. Positively, Guests get to watch the transformation in real-time, which is pretty spectacular and a unique experience. But, on the other hand, as we mentioned, the final reveal may not be too spectacular.

We decided to poll our audience to see whether or not the majority of you like the fact that the transformation is happening before our eyes, or if you will miss the shock value that a transformation would entail, and it seems that everyone is quite divided! As you can see below, 55% of you enjoy watching the castle get decorated, and the other 45% want more of a surprise element.

Personally, I have a feeling that Disney will add some final touches the night before the big day so that we see something that we haven’t before. Also, there will likely be lighting that will accent the new decor that will be showcased, giving Guests something new to see. That being said, this is currently just my personal thoughts and speculations.

Bioreconstruct (@bioreconstruct) posted a photo of the most recent progress of Cinderella Castle, take a look at the views below!

Tall photo. Cinderella Castle as of March 27. Decoration in progress for the 50th anniversary of Walt Disney World. pic.twitter.com/plQf8jDIsJ

The interesting thing about the slow application of these decorations is that we have seen Disney deck out not only Cinderella Castle, but all of Magic Kingdom overnight for Halloween and Christmas. If they are able to do all of that in one night, many would assume that the castle’s decoration for the 50th should not take months.

No matter what, we will surely be enthralled in the 50th celebratory world with Main Street U.S.A. also joining in on the glam!

So what do you think! Would you rather see the decorations go up slowly, or have a big grand reveal?

If you want to be at Disney World during the 50th to celebrate at Disney’s Hollywood Studios, EPCOT, Magic Kingdom, or Disney’s Animal Kingdom, you should book a trip to see Mickey Mouse and Minnie Mouse today! Click here to begin.