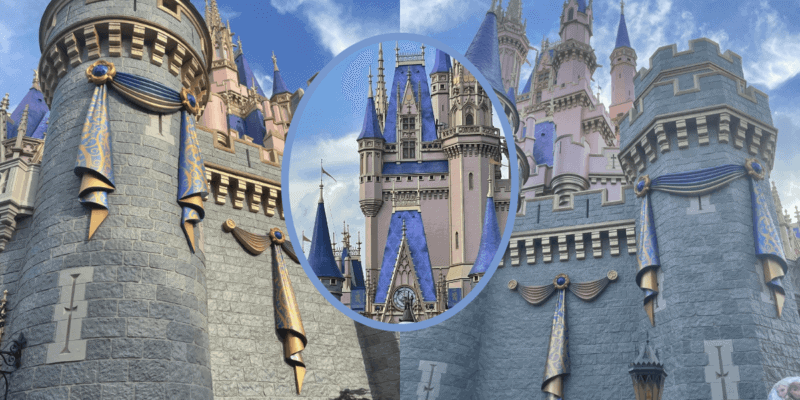 If you want a sneak peek of the 50th anniversary at the Walt Disney World Resort, you have come to the right place!

As Disney begins to prepare to celebrate the big 5-0, Inside the Magic will be following along to track to progress that is underway at every Disney World park. Today, we see more beautiful decorations added to Cinderella Castle at Magic Kingdom.

The most highly anticipated transformation that many Disney World Guests cannot wait to see complete is the new regal blue and iridescent pink and gold color scheme that will make Cinderella Castle a magical sight. Lucky for all of us curious Disney fans, the change will not happen overnight, and we will be able to see the transformation evolve as we approach the official first day of the anniversary celebration, October 1.

Recently, we reported on the first detail to be applied to the side of the castle that will give it the shine and shimmer that was detailed in the concept art that Disney released of the castle. Now, it seems that Disney is moving at a fast pace because just a few days later we can see that another giant addition has been made to the side of Cinderella Castle at the Magic Kingdom! It’s clear that these gold, blue, and rose additions prove Disney is adding more sparkle to the theme park’s centerpiece.

Considering these huge bows and banners have to be made and painted, the fact that a few have been applied so quickly and close together, even when we still have months until the official big day, has this reporter feeling two ways.

First, it seems that there is a chance that the castle will be ready before October 1. Although this would be really exciting for Disney Guests, if too much is revealed before the big day, it may diminish the magic of the celebration since it is not “new”. On the other hand, Disney might be moving fast because of the amount of work and add-ons that must be created and installed on the castle.

Just look at how these decorations shine and shimmer in the sunlight!

We can also tell that, when comparing our image below to the concept art, the castle is already “shining, shimmering, splendid,” and the iridescence of the new blue hue seems to show that when the castle decorations are complete, the Magic Kingdom centerpiece will have a sparkly effect! Take a look and tell us what you think.

Cinderella Castle will also not be the only shining centerpiece at a Disney World park! Over the 18 months of the celebration, Disney’s Animal Kingdom will decorate the Tree of Life, Tower of Terror will seemingly look not so terrifying at Disney’s Hollywood Studios, and EPCOT will receive a permanent transformation to Spaceship Earth.

Continue to follow along with Inside the Magic as we travel along the road to the 50th!

Do you think that Disney will fully decorate Cinderella Castle before the anniversary begins?