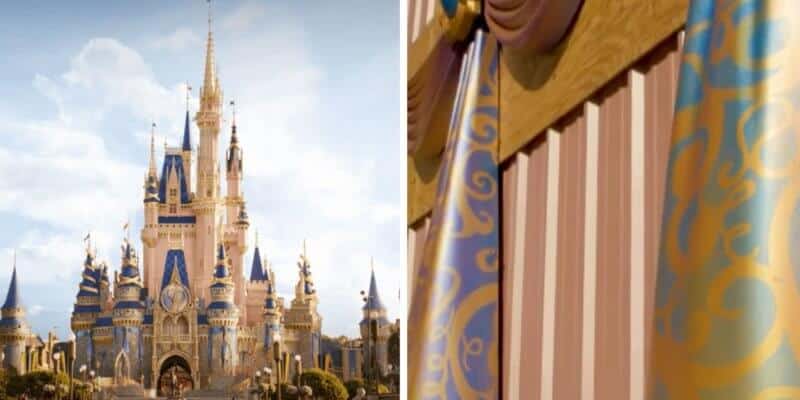 If you have been following the news of Disney World’s upcoming 50th anniversary celebration, you likely are aware that Cinderella Castle will be getting a makeover!

Like every main centerpiece throughout all four Disney World theme parks, Cinderella Castle will be received a new shining, shimmering, rose gold finish to celebrate 50 years of magic! Although Disney released artist renderings of the castle previously, now, Walt Disney Imagineering is going behind the scenes to show us what they are planning to add to the castle!

Disney Imagineer Zach Riddley took to Instagram to share a video of the Imagineers and creative team behind the Cinderella Castle decorations, and it is jaw-droppingly exciting to see that pieces of the castle are already being completed to add to the exterior in just a mere matter of months.

Our @WaltDisneyImagineering teams have been hard at work on the new décor package for Cinderella Castle at Magic Kingdom and today I’m excited to share a first look at our progress. As you can see in the video, Cinderella Castle will receive the royal treatment when shimmering jewels and ribbons in royal blues and EARidescent golds will wrap its turrets and towers in all directions for the 50th anniversary of @waltdisneyworld later this year.

To celebrate this enduring icon of Magic Kingdom, our Imagineers developed these new colors, gold detailing and vibrant hues after drawing inspiration from Mary Blair’s vision in the classic Cinderella film. We look forward to sharing more about our design inspiration and approach as we bring this vision to life and cannot wait to see these details begin to adorn the castle in the weeks and months to come!

Chris Beatty, Creative Portfolio Executive at Walt Disney Imagineering stated that “this is super exciting because it’s not every day that we get to dress the castle for a super incredible and very important celebration.” The castle will be rose gold iridescent with added pieces that are being built right now to attach once complete. The Imagineering team continued, “When Guests walk into the Magic Kingdom, we just want them to stop and be in awe”.

It seems that Disney is really going to dial up the already stunning makeover that was completed on Cinderella Castle under a year ago with the added finishing, all of which will likely debut on October 1 as that is the start of the 50th Anniversary celebrations at Disney.

At EPCOT Guests will see a new Spaceship Earth lighting package which will shimmer for years to come as it remains permanent on the structure, Disney’s Hollywood Studios will light up Tower of Terror, and Disney’s Animal Kingdom will have the Tree of Life sparkling. From the concept art, it seems that the big connecting factor here is to make sure every park is shining for the anniversary.

What do you think of the new additions to Cinderella Castle? Do you think it is too subtle or just right?