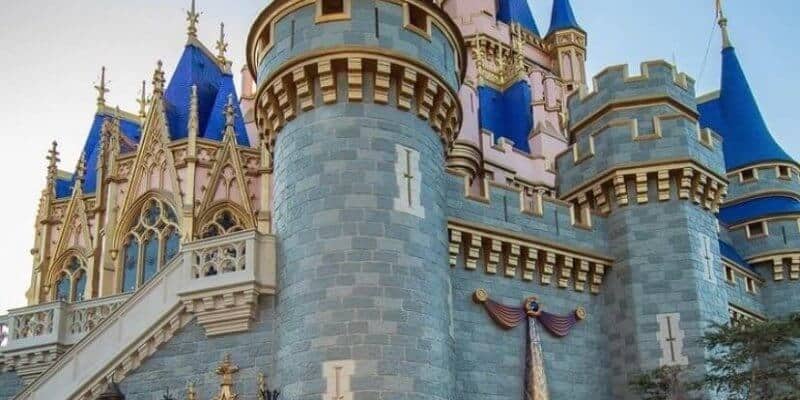 The royal makeover for Cinderella Castle has begun!

Walt Disney World is gearing up to celebrate the 50th Anniversary of the Resort. Starting October 1, the entire resort will begin the 50th Anniversary festivities with their Guests! There is a lot to do before the celebration kicks off, including decorating Magic Kingdom’s icon, Cinderella Castle.

Imagineer Zach Ridley has shared on social media that the first of many beautiful decorations have been added to Cinderella Castle today!

We recently showed a behind-the-scenes look at the decorations that Disney preparing for Cinderella Castle, which you can read more about here. Now, Disney has taken the first step and put up the very first of many decorations onto the castle, and we are so excited! More will be coming in the next few days, but as you can see from the concept art above there is a lot to do.

Disney Imagineer Zach Riddley shared a few gorgeous photos of the first decoration added to Cinderella Castle along with the caption:

Overnight our @waltdisneyworld and @waltdisneyimagineering teams installed the first embellishment on Cinderella Castle featuring a royal blue jewel with gold detailing and shimmering draping. This is the first piece of the royal treatment that will adorn the castle for “The World’s Most Magical Celebration” as we celebrate the 50th anniversary later this year. I cannot wait to see the castle transform in front of our eyes as our teams add more of the shimmering jewels and ribbons in royal blues and EARidescent golds on the turrets and towers of this beautiful castle.

The color theme for Walt Disney World’s 50th Anniversary is EARidescent, which combines royal purples, blues, and gold together for the perfect royal color pallet. The decorations definitely complement the new paint job the Castle recently received as well.

Mickey and Minnie will be perfectly matching Cinderella Castle at Magic Kingdom as they too will be getting a royal makeover in the new EARidescent colors! How cute are they?

We cannot wait to see the rest of the decorations go up on Cinderella Castle, as well as the other decorations around the resort as we inch closer and closer to October.

Will you be heading to Disney World for the 50th Anniversary? Let us know in the comments

We can help you plan the perfect Walt Disney World vacation, click here for more information