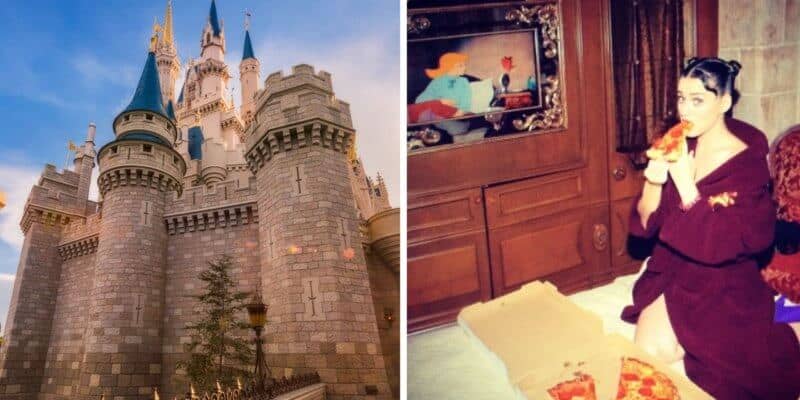 If you had the chance to stay anywhere on Walt Disney World Resort property, where would you choose?

One of the most popular answers would likely be Cinderella Castle Suite in Magic Kingdom.

Located inside Cinderella Castle, the Cinderella Castle Suite allows very lucky (and very few) Guests to stay overnight at a Walt Disney World Resort theme park where they have their own personal fairy godmother, the ability to explore Magic Kingdom (while supervised) at all hours of the night, and the luxury experience that is held within the crystal-infused suite.

If you want to learn more about the Cinderella Caste Suite and all the jaw-dropping, spectacular details it has to offer, click here to take a full tour.

You may be thinking to yourself, so how much does one night in this place cost? Interestingly enough, it doesn’t. The Cinderella Castle Suite was once a phone operator room that Disney used, but the theme park destination transformed it for the Year of A Million Dreams so they could gift a stay in the suite as a prize to certain families visiting Walt Disney World.

The suite has since been used as a prize for charities, tours (that will cost you around $12,000 to attend — and no, you don’t get to sleep there), and at times, for special Guests visiting the park. As you may assume, many of these special Guests are celebrities, so let’s take a look at one big Disney fan who lived out her princess dreams a few years ago!

Pop sensation, American Idol judge, and Disney lover Katy Perry was able to have her own personal Cinderella moment in 2014 when she and her guests of choice were allowed to spend the night in the Castle Suite. Katy described the below photo as a “princess pizza party”  and it seems that she was having exactly that!

One of the perks of staying in the Cinderella Castle Suite is that for your time there, you can request whatever you want and Disney will do their best to make sure it gets to you. In this case, it seems that Perry wanted to be a simple princess with pepperoni pizza being her meal of choice while staying in the suite.

Of course, Katy was not the first or last big name to ever have a slumber party in the castle, and there are plenty of other celebrities who have stayed inside the Magic Kingdom centerpiece. Here are some examples!

Back in 2010, Disney star Kevin Jonas ( of The Jonas Brothers) and his wife, Danielle, were invited to the suite to spend their first anniversary there. In 2012, Tom Cruise and his daughter, Suri Cruise, took a Walt Disney World vacation, and lucky for the two of them, Disney offered them the chance to stay in the suite for a night!

Additionally, Neil Patrick Harris, his husband, David, and their two kids stayed in the suite in 2013. Considering Neil’s love for Disney Parks and his participation in various Candlelight Processionals, as well as the fact that he has his own drink in La Cava Del Tequila in EPCOT’s Mexico Pavilion, it really is no surprise that Disney invited the family to stay!

Personally, I hope to one day also be like Katy Perry and host my very own princess pizza party in the middle of Magic Kingdom, but for now, I will keep on using my Annual Pass to get me a taste of the magic!

Do you think that Disney World should allow regular Guests to stay in the castle suite at a cost?

If you want to stare at Cinderella Castle, and then Park Hop to EPCOT, Disney’s Hollywood Studios, and Disney’s Animal Kingdom — you can! Click here to get your vacation started today.