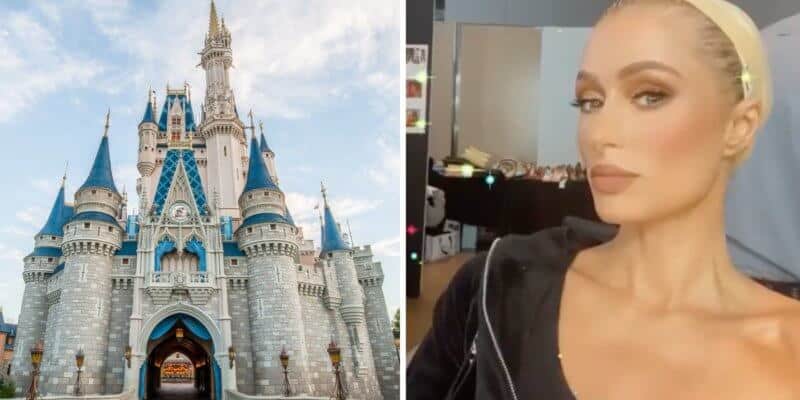 Have you ever seen a celebrity while visiting the Disney Parks?

I remember one time I noticed fashion designer Betsy Johnson in New Fantasyland at the Magic Kingdom at Walt Disney World. She had a Disney Cast Member leading her around, but that didn’t stop Guests from asking her for a photo.

It’s safe to say, you can imagine how often some celebrities must be interrupted during their Disney vacations. They often book private VIP tours for that reason!

Well, while on the show, Paris Hilton explained how she has been able to go to Disney World and feel more like a “normal” Guest, and not one that everyone is staring at or coming up to and asking for a photo with.

Hot One‘s host, Sean Evans, told Hilton, “I’ve heard stories about you going to Disney in full prosthetics to disguise yourself from photographers” to which Hilton acknowledged and continued to explain other instances where she had 50+ cameras following her every move, and what she would do to trick them and escape. Some hacks included dressing her friends in a blonde wig and giving them a fake chihuahua to look like her dog, Tinker Bell.

Plus, if you are a big enough fan to name your puppy after the Peter Pan fairy, it seems like it would be a no-brainer that you are a huge Disney fan. So, I can totally see why Paris Hilton would wear fake prosthetics if it meant she could enjoy the park without others trying to invade on her vacation!

As you may imagine, Hilton is not the first celebrity to head to a Disney Park while in disguise. In fact, Channing Tatum (Step Up, 21 Jump Street) was once seen in disguise while riding Tower of Terror according to Cinemablend. The actor decided to ride in a Santa Suit with a full beard. It seems likely that this was for a joke because if Tatum was trying to avoid eyes on him, a Santa Suit is not the best move, though it does cover up most of his face!

Supermodel and host of America’s Next Top Model, Tyra Banks, has also been to Disneyland in disguise. Banks once stated in an interview,

“I went to Disneyland and I love going, I’m obsessed with Disney, I’m obsessed with Walt Disney the man, actually. I like to go, but I want to be with everybody and hang out and not just always have to go through the back door. So I put on a disguise. It was an older woman’s thing. I put on one of my mum’s wigs, because my mum likes to have grey in her wigs. So I took one of her wigs, I put on her old-fashioned glasses and then she has like these leopard, big shirts, I put that on and a broach, a broach is going to make you look old… I had a back story: ‘Yeah, my husband invented those car seat covers that go on like the car seat covers, like the cab drivers have and I have so many leftover beads that, honey, I decided to make those things that go over doorways. I’m so happy, we (are) here from Detroit and I’m just so happy because I love Walt Disney.’”

The late pop sensation Michael Jackson was known to visit Disneyland while in disguise as well. Take a look at some footage of Jackson with ex-wife, Lisa Marie Presley, while wearing a ball cap, sunglasses, and what looks to be a fake mustache.

Do you know of any other celebrities that have had to wear a disguise at Disney? Let us know in the comments below.