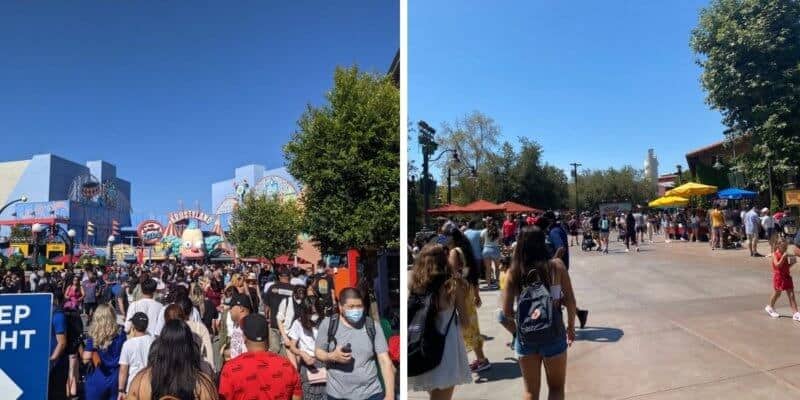 Although yesterday was the Fourth of July, today is when many companies observe the holiday, allowing many employees to have the day off.

Because of this, traveling during the holiday is a popular option as it allows people to use fewer vacation days while still being able to take a full week-long vacation. Now that Disneyland and Universal Studios Hollywood are both now open to out-of-state Guests, the theme parks have started to see a lot more people visit on vacation.

With this past weekend being a long weekend, both out-of-state Guests and locals have been filling the California theme parks. Interestingly enough, it seems that Disneyland may not have been the busiest theme park in terms of crowd appearance on the Fourth of July. Hastin (@hastin) took to Twitter to show off the crowds at Universal Studios Hollywood, and the theme park looks pretty busy.

The Tweet garnered some reactions, and Dino Plushie Addict (@ladysparkleshoe) responded with a photo of Disney California Adventure at Disneyland Resort that was also taken on the Fourth of July. From its looks, it seems that Universal Studios Hollywood had much bigger crowds than Guests had to navigate.

Woah. Way more people in the walkways than Disneyland had. This was DCA around 10:45? Maybe 11?

Woah. Way more people in the walkways than Disneyland had. This was DCA around 10:45? Maybe 11? pic.twitter.com/E3wgSWipuH

Although the size of a walkway can determine if a crowd will form or not, it seems that Dino Plushie Addict’s shock to the Universal crowds compared to what she says at Disney California Adventure likely means that the crowds in walkways never formed into a large crowd. The Fourth of July typically leaves Disneyland Resort packed but under a reduced capacity; this may have been the quietest Fourth of July the theme park resort has seen in years.

Did you visit Disneyland or Universal Studios Hollywood this weekend? Are you comfortable with theme park crowds again yet?